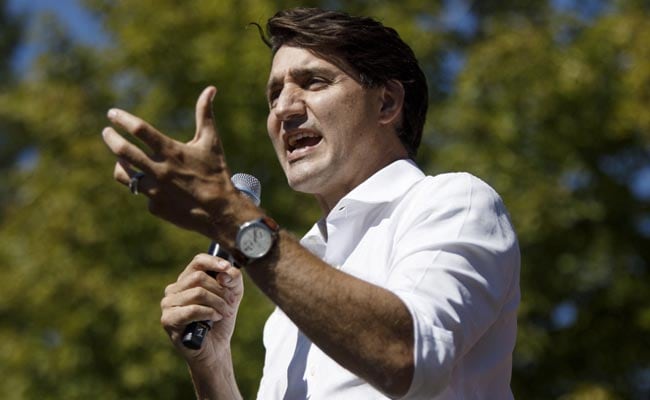 Addressing the House of Commons as the protests hit the two-week mark, Trudeau warned that trucker blockades of two key bridges connecting Canada with the United States were threatening the country’s economic recovery from the pandemic.

“Blockages, illegal demonstrations are unacceptable, and are negatively impacting businesses and manufacturers,” Trudeau said. “We must do everything to bring them to an end.”

Hundreds of big-rig trucks are now paralysing the streets of downtown Ottawa, with the mayor calling the situation out of control and declaring a state of emergency.

“We are providing you notice that anyone blocking streets or assisting others in the blocking of streets may be committing a criminal offence,” police said in a statement.

“You must immediately cease further unlawful activity or you may face charges.”

The so-called Freedom Convoy began in January in western Canada — launched in anger at requirements that truckers either be vaccinated or test and isolate when crossing the US-Canadian border.

But the movement has morphed into a broader protest against Covid-related restrictions and Trudeau’s Liberal government, and put a spotlight on pandemic curbs around the world.

Copycat protests have popped up as far away as New Zealand, with calls on social media for similar rallies in Europe and the United States.

And more protesters have been joining the blockade of the Ambassador Bridge between Windsor and Detroit in solidarity with the trucker movement bringing the center of the capital Ottawa to a halt.

“We’re all tired of this pandemic but these illegal blockades must stop,” Industry Minister Francois-Philippe Champagne tweeted.

The suspension bridge, he noted, “is the most important land crossing in North America and is critical to our supply chains.”

More than 40,000 commuters, tourists and truck drivers carrying US$323 million worth of goods travel across the span each day.

Scores of Canadian and American chambers of commerce and industry associations demanded the bridge is cleared, saying “as our economies emerge from the impacts of the pandemic we cannot allow any group to undermine the cross-border trade.”

Another key trade link between Coutts, Alberta and Sweet Grass, Montana has also been clogged by protesters for several days.

“This is a dramatic situation that is impacting the wellbeing of Canada’s relationship with the United States and impacts immensely how business is able to conduct its operations,” University of Ottawa professor Gilles LeVasseur told AFP.

He said that Ottawa and Washington must intervene.

“We’re all tired, we’re all frustrated” after two years of pandemic restrictions, Trudeau told reporters earlier in the capital, adding that Covid inoculations are “the way we’re going to get to the other side.”