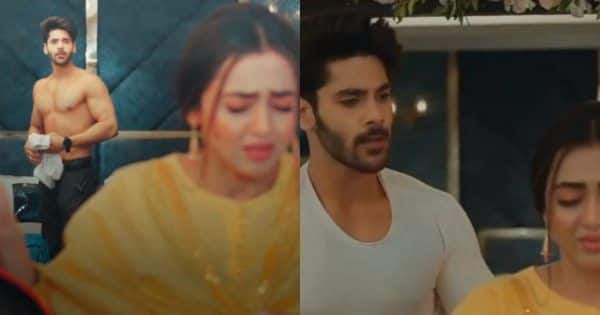 Naagin 6 starts with Pratha (Tejasswi Prakash) tying a creeper and getting down the cliff. She manages to save Rishabh (Simba Nagpal) from death. Later, they rescue his brother (Abhishek Malik). They thank Pratha. Rishabh feels he has seen Pratha somewhere. He remembers the incident with the assistant. After Pratha saves them, Rishabh’s brother tries to get a lift for Pratha. Shesh Naagin reaches the spot in a jeep. We see a flashback where the Professor tells Shesh Naagin that she can identify the 20 asurs (traitors) with her touch. Shesh Naagin touches the picture of the Amrit Manthan. She gets a signal of a place near Delhi called Badarpur. The Professor says a marriage is happening there. You will find the enemies there. The Professor says after finding the 20 people we need to get the antidote. Also Read – Naagin 6 Review: As Tejasswi Prakash-Simba Nagpal’s show hit the tube, here’s a look at five things that stand out for good and bad reasons

Though Pratha is reluctant, the two boys manage to convince her to take a lift in the jeep of Shesh Naagin. She remembers her as someone who saved her from the boys. Pratha is worried about her new job. Rishabh’s brother flirts with Pratha when she gets hiccups. Rishabh tries to identify Pratha. He tells her that he has seen her somewhere two days back on Republic Day. Pratha is worried about the police incident and gets down from the car hearing this. She is concerned that if her employers hear of it, she will be jobless. Also Read – Karan Kundrra goes an extra mile to prevent oops moment for Tejasswi Prakash; Naagin 6 actress goes aww – watch video

Shesh Naagin tells Rishabh that every person has a hidden story. She asks the boys what happened. They say we saw a snake and lost control. Shesh Naagin says it could be an Icchadhari Naagin. They ask her if she believes in all that. Rishabh’s mom is doing aarti at their mansion. She is in an angry mood. The relatives wonder where are Rishabh and his brother. The boys come home and inform Reema (Sudha Chandran) about the accident. They reveal about the snake and how the car fell into the cliff. They talk about the girl who saved them. Reema tells Rishabh that she won’t let him work in the ARMY any more. As the relatives hear the story, they wonder if it was an Icchadhaari Naagin. Also Read – Tejasswi Prakash REVEALS how she and Karan Kundrra will be celebrating their FIRST Valentine’s Day[EXCLUSIVE Interview]

The Professor (Manit Joura) tells Shesh Naagin that it is a full moon night when the senses of a Naagin are on its peak. He says today you will get a clue. After a signal, the Professor says the first asur is a man who wears a wooden foot. Rishabh is reading the note that the man left for him. He wonders what is the threat to the nation. He asks his comrades for some information on the man. Rishabh feels the pandemic is connected to the note left for him. Pratha reaches the home of Rishabh. Her chappals break and she is embarrassed. The waiters are discussing the pandemic in the village. A girl thinks that Pratha is the parlour girl and brings her upstairs to do her nails. In the mean time, the real parlour girl comes there. The relative feels that Pratha is a gate-crasher and could have stolen stuff from the venue. They search her bag but find nothing. Pratha says sorry to the manager who called her for the job of a helper at the gala function.

Finally, they keep her there as a helper for the wedding planner. Rishabh and his brother are getting ready for the roka. The manager tells Pratha to deliver the sherwani to Rishabh for his roka. She goes to the room where he is shirtless. She closes her eyes. Rishabh asks Pratha why did she get down before if she had to come here. She says she needs the job. Rishabh feels something is wrong. Urvashi and her husband come with their daughters. They are discussing the story of Naagins. It seems Urvashi’s husband is an arms dealer. He says young people dismiss talk of Naagins as superstitions but they do not know the heartland of the nation.

At last, Urvashi’s daughters come for the roka. A girl (his fiancee) comes to Rishabh and asks him if he is disinterested in her. She tells Rishabh that he can be a bit romantic. He says we have been childhood friends and we cannot be overnight romantic in an arranged marriage set up. Rishabh says he cannot do this (act romantic and mushy with her). Shesh Naagin (Mahekk Chahal) has got a job as head of security in Rishabh’s home. The manager introduces her as Reena Khanna. The real security lady has been tied up in her car. Rishabh wonders if Pratha is actually part of the catering team or not. Rishabh’s brother starts flirting once again with Pratha.

Rishabh’s fiancé finds him looking at Pratha. She asks him who is the girl? He says she is one who saved our lives. She asks what happened. He narrates the Naagin incident. Rishabh gets upset as she refers to the armed forces as her sautan. Shesh Naagin as Reena Khanna introduces herself to Rishabh. She checks out the leg of Rishabh’s dad after seeing him limp. He says it was a cramp. Later, the fiancee’s sister (Rhea) drags Rishabh’s brother (Abhishek Malik) away from Pratha. She scolds her for flirting with him. Rhea angrily tells Pratha to drink alcohol and tells the manager to throw Pratha out of the house. Pratha says sorry to the manager. She says I did not do anything. The manager says I warned you not to talk to the family members.

The senior manager tells his assistant to send Pratha to the outhouse. Pratha prays for her job. Shesh Naagin sees the man whom she feels is the one with the wooden leg, which is the manager who limps a little.

Pratha and Shesh Naagin head for the outhouse. Rishabh is dancing with his fiancée thinking of Pratha and the message. It is Aadi Naagin who goes to the manager. She thinks he is a man with a wooden leg. He tells her that he was waiting for Pratha but she is also sexy. He tells her to share a drink. Aadi Naagin changes into her real avatar. The manager is in shock. He runs out. Pratha sees her in that form.