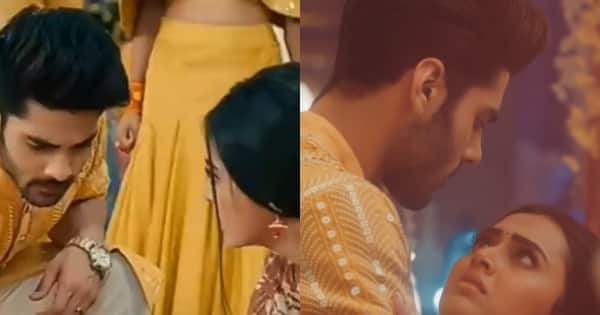 Naagin 6 20 February 2022 Written Updates: The episode begins with Shesh Naagin killing the minister. She gets a glimpse of a group of five people who are involved in the spread of the pandemic in the country. However, she doesn’t have a clue who they are. Before breathing his last, he points towards Rishabh. Shesh Naagin believes that Rishabh is not a protector but a destroyer. Seema asks Anya to call the minister down for the haldi function. Shesh Naagin hides his body and takes him away when Anya leaves. She is about to throw him down the stairs but then puts him on the chandelier. Pratha (Tejasswi Prakash) who is walking by with the haldi bowl sees blood dripping into it. The Shesh Naagin takes away the body and Pratha is proved wrong. Also Read – Karan Kundrra shares a glimpse of his and Tejasswi Prakash’s FIRST Valentine’s Day; showers gifts on Naagin 6 actress [VIDEO]

Riya is furious with Pratha. Urvashi asks Seema to get Pratha fired. Rishabh comes to her defence and stops them from firing her. Pratha starts collecting haldi which has fallen down. Rishabh (Simba Nagpal) helps her. Pratha is surprised that Rishabh came to her defence. Urvashi, Seema and other guests feel awkward. Rishabh’s grandmom reminds Seema that she should have done the pooja. Seema blames Pratha for all the wrong things. Elsewhere, the face of the minister appears on the painting at Professor’s lab. He understands that Shesh Naagin has killed the first Asur aka the minister. Also Read – Naagin 6 actress Tejasswi Prakash gives EPIC reaction when asked about marrying Karan Kundrra – Watch Video

Rishabh heads to Pratha’s room to look for her bag which has the fragment of the letter. He searches her bag and is able to find the other part of the letter. Rishabh learns that there are others who are involved in destroying the country. Later, Mayank gets furious with Pratha for being intent on continuing with the job. He offers to handle everything for her after marriage but Pratha doesn’t want to let go of the job. Mayank leaves. Ritesh asks Pratha to think before making any decision as she deserves a better man in her life. Also Read – Naagin 6 duo Tejasswi Prakash-Simba Nagpal, Mouni Roy and more: TV celebs who ruled Instagram with their AMAZING posts

Mayank sees Shesh Naagin hiding the body of the minister in a sack. He is shocked and runs away. Pratha gets a new bowl of haldi but Seema takes it away before she makes a mess again. Later, Rishabh seems mesmerized by Pratha. He recalls the letter and believes that she has something to do with the letter and the contents in the letter. Reem sees him watching her intently and questions him about the same. Rishabh says that he is keeping an eye on her.

Mayank comes inside the house and is all scared. He is about to reveal the murder of the minister. Seema is furious with Pratha and Mayank for creating a scene. Mayank finally reveals that someone has killed the minister. Everyone is a huge shock. Urvashi is in disbelief and breakdown. But then the minister makes an appearance saying that he is alive and well. Mayank is shocked. Seema asks Mayank to leave harshly. She warns Pratha to never come in front of her eyes. The haldi functions take place. Rishabh wonders about Pratha’s actions and Mayank’s words. Later, the minister is about to leave and Urvashi questions him. Urvashi believes that he and the security head is up to something. However, he makes up a convincing lie. It is later revealed that the minister is Shesh Naagin in reality.

Later, we see the Gujrals checking the news wherein the update on the mahamaari is being announced. Pratha, Seema and the rest are shocked to see the news. The Gujrals discuss the lockdown situation. Later, as Pratha is about to fall, Rishabh holds her. They share eye contact. Seema spots them. She gets furious with Pratha for destroying the rangoli. Rishabh is about to defend Pratha but gets a call and leaves. Seema warns Pratha to be careful. Radha asks Seema to conduct a pooja but she rebuffs her.

Shesh Naagin comes to Shiv Mandir and expresses her wish to kill all of the Asur who are destroying the country. She wants to find out the one with a mole on his hand. Rishabh and his friends discuss the letter. His friends believe that she is behind the whole planning. Rishabh, however, says that she might just be a pawn in the whole game. Pratha comes to Rishabh’s room. His friends point a gun at her. Rishabh believes she is eavesdropping. Pratha reveals that she is there to change the bulb which is flickering. Rishabh keeps an eye on her. When Pratha continues to change the bulb without switching off the light, Rishabh calls her off. Rishabh gets a message that lockdown may be announced soon. Pratha gets tensed.

Later, Seema and Gujrals wonder where Kataria aka the minister is at. Seema decides that the wedding must take place tomorrow. Urvashi has gone to market and Seema says she will talk to her later and discuss the wedding. The family members are all discussing the lockdown and all the necessities required. Seema tells Rishabh that they’ll get married tomorrow. Rishabh gets angry. Seema says that he will get married today. Reem asks Rishabh to calm down. Rishabh asks them to think about what’s happening in the country as people are fighting a pandemic. Pratha reveals her problems to a fellow team member from the organising team. Reem talks to Rishabh, Riya also asks Rishabh to not postpone the wedding. Ritesh says that Rishabh is right. The latter says that he won’t be marrying right now as he wants to protect the country. Elsewhere, Pratha calls her father and tells him to stay inside the house.

Later, Rishabh gets a call and leaves the house to make arrangements for the needy. Rishabh’s grandmother asks him not to step out but Rishabh is not ready to listen. While talking, the blue Naagin spots a mole on Rishabh’s hand. She plans to kill him right away. Reem asks Mahekk to send a bodyguard with Rishabh. The latter reprimands her saying that he is an army officer and can take care of himself. He leaves and he discusses Pratha with his colleague asking him to find out about her. Shesh Naagin comes in front of his car, Rishabh honks but she doesn’t move. Gas starts leaking and Rishabh gets into an accident. He is stuck inside the car. Shesh Naagin lights the car on fire. However, Rishabh breaks out from the window. He wonders how can his car catch fire. Rishabh runs away from the blast. He senses someone following him. Unaware that the Shesh naagin is on his trail, Rishabh is running to safety. Rishabh gets caught in a storm. Shesh Naagin comes to kill him. Rishabh is unaware of who he is dealing with and falls unconscious. Shesh Naagin believes that he is dead.