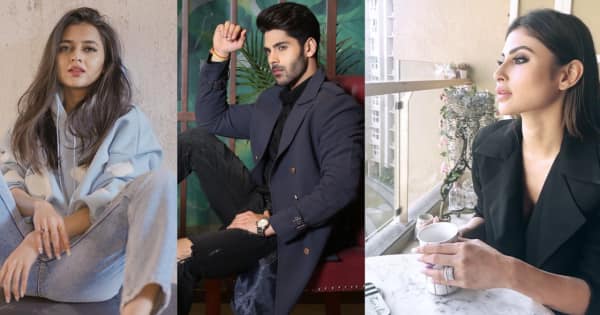 Naagin 6 actress Tejasswi Prakash shared a couple of pictures on her Instagram handle lately. The actress had a perfect girl next door look. She flashed various emotions in each of her pictures. Check them out below… Also Read – Tejasswi Prakash drops a flirtatious comment on Karan Kundrra’s recent post; fans shower love on KK

Naagin 6’s hero, Simba Nagpal shared a couple of pictures from his photoshoot. He looks dashing as ever. Simba wore a trench coat with a black shirt and denim. Check out Simba’s pictures here: Also Read – Naagin 6: Tejasswi Prakash’s fans are UNHAPPY with less screen time of Pratha; demand more scenes of her with Simba Nagpal – view tweets

Karan Kundrra is gearing up for something big it seems. The actor shared a video from a photoshoot. Karan looked cool in a printed tee and trousers. Check out the uber-cool reel here:

Kuch Rang Pyaar Ke Aise Bhi and Kasautii Zindagii Kay actress Erica Fernandes shared a way back throwback picture of herself from her toddler days. Baby Erica was bald back then. Erica was smitten with the picture and called herself a ‘gol gappa’. Check out the post below:

Yeh Rishta Kya Kehlata Hai actress Hina Khan has been on a trip to Egypt with her beau Rocky Jaiswal. Hina has been sharing photos from her beautiful trip online and one of the posts wherein she posed with a camel. Check out the pictures below…

Yeh Hai Mohabbatein actress Divyanka Tripathi shared a funny video in which she took up the flirting tutorial challenge. And the Khatron Ke Khiladi actress aced it!

It’s been over a year that Bade Achhe Lagte Hain 2’s Ram Kapoor aka Nakuul Mehta became a father. However, it’s of late that he has been sharing pictures and videos with his handsome toddler son, Sufi. Just the other day, Nakuul shared the most adorable video of Sufi and posted it on their Instagram. The video will make you fall in love with Sufi all over again.

Disha Parmar wore a leather jacket with fur around the hands and collar. However, it’s the eye makeup that made us skip the heartbeat. Check it out here:

Newly married Mouni Roy shared a reel video on her gram in which she was dishing out boss lady vibes. She had her sleek hairdo and kohl eyes, with nude lips. Check out the glamorous video here:

Handsome Hunk Shaheer Sheikh, who will soon be seen in Woh To Hai Albelaa, shared a video on his Instagram handle. The Kuch Rang Pyaar Ke Aise Bhi 3 actor was shirtless. The video is from Dubai and it seems the actor wanted to give a glimpse of what his mornings look like. He played Siddhant Chaturvedi, Deepika Padukone, Ananya Panday and Dhairya Karwa starrer Gehraiyaan’s title track on the video.

That’s all in the TV Instagrammers of the week.