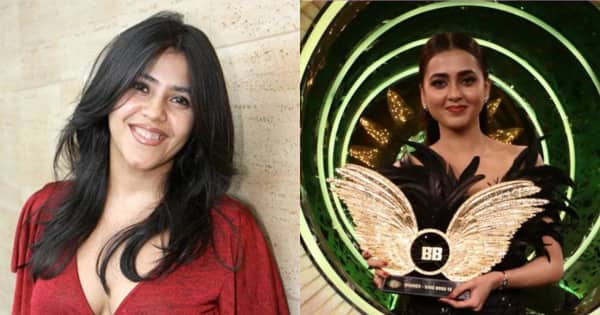 All the Tejasswi Prakash fans are super excited for Naagin 6. They are waiting with bated breath for February 12 as that’s when the show will air. The actress gained immense popularity as she won Bigg Boss 15 and now she is going to be the lead in Ekta Kapoor’s Naagin 6. It was during the finale of Bigg Boss 15 that Naagin 6’s announcement was made. This means that the actress signed the show when she was inside the controversial house. So how did this casting take place? In a recent interview, Ekta Kapoor has shared the deets. Also Read – Naagin 6 star Tejassswi Prakash reveals she will be happy if she gets compared to Mouni Roy; here’s why [Exclusive]

The producer in an interview with Pinkvilla revealed that she had never met Tejasswi in the past, however, she got impressed with her persona in Bigg Boss 15. She reached out to Tejasswi’s manager who agreed to get her on-board Naagin 6. Ekta Kapoor was quoted saying, “So, I saw Tejasswi in the show, we spoke to her manager, and we signed her with the manager who assured us that she will be on. Before this also we had seen her, but on the show I just liked her so much. I don’t see too much of Bigg Boss honestly, but the clippings are all over Instagram and you watch it. I think she is a very attractive young girl, there is something in her eyes. Honestly I have never met her except for in the show (Bigg Boss 15) and when I gave her a narration now (for Naagin 6).” Also Read – Bigg Boss 14 contestant Eijaz Khan admits to cheating in a relationship; says ‘Maine galti ki…’

Well, well, Tejasswi indeed managed to impress quite a few people with her fierce and strong avatar in Bigg Boss 15. In Naagin 6, she is going to be the lead serpent who is going to save the world from pandemic. Let’s see how that goes! Also Read – Naagin 6: Tejasswi Prakash on comparisons; Ekta Kapoor on expecting trolls; Maheck Chahal on her role and more – Top 10 exciting updates about the show