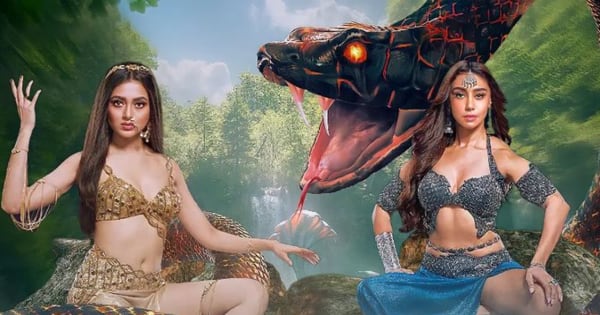 Naagin 6, 19 February 2022, written update: The episode begins with Shesh Naagin Mehak going behind Pratha’s manager with an intent to kill him. Mehak knows about his fake leg and hence she kills him. Pratha aka Tejasswi Prakash, on the other hand, feels that her boss would be angry and hence he left after waiting for her. Elsewhere, Mahek comes back to the Professor feeling that she has taken her revenge. However, the professor gives her the bad news saying that her revenge is not yet complete and the real criminal is still out there. We learn that Urvashi’s husband has a fake leg. They discuss a business deal. Urvashi asks him to focus on the wedding of their daughters. Urvashi’s husband reveals that he helped the enemy country in destroying the country. Also Read – Naagin 6: Urvashi Dholakia and Mahekk Chahal show-off their Naagin dance in new video; netizens request to make reels with Tejasswi Prakash

Pratha believes that Rishabh (Simba Nagpal) complained about her to the manager and hence she lost her job. Ritesh (Abhishek Verma) asks Rishabh for help. The latter learns that Pratha was kicked from the job by Riya. Rishabh convinces Riya against her decision. Ritesh thanks Rishabh for reinstating Pratha. Elsewhere, the shesh Naagin brings sapole to expose the person with a fake leg. The house members and guests are shocked and scared on seeing so many tiny snakes. Also Read – Naagin 6 actress Tejasswi Prakash dishes out girl-next-door vibes in latest pictures; fans apologise to Karan Kundrra for crushing on her

Elsewhere, Rishabh convinces Pratha to come back to the job. Pratha gets very happy. Later, Ritesh reveals that he has lost Riya’s engagement ring, Rishabh hands over his ring to him. Ritesh and Riya get engaged. Rishabh and Reem get engaged too. Rishabh seems mesmerised by Pratha’s beauty. Elsewhere, Urasvhi and her husband come to a room. They discuss the money they hid in the Gujral household. Urvashi gets violent with her husband. We later learn that it’s not Urvashi with Shesh naagin in Urvashi’s avatar. Shesh Naagin has learned about Uvrashi’s husband having a fake leg. Also Read – Karan Kundrra gets clicked at airport alone; fans say, ‘Missing TejRan’ – View Pics

Ritesh and Pratha talk and Rishabh interrupts them. Rishabh warns Pratha to stay away from Ritesh. Elsewhere, back in the room, Shesh Naagin is killing Urvashi’s husband. However, the real Urvashi comes back and Shesh naagin has to leave. The guests come up to check up on the minister, Urvashi handles the situation. Elsewhere, Rishabh’s friends tease him with his obsession with the half letter and the message. Rishabh is intent on finding out about the whole message. Elsewhere, Seema gives directions to Pratha on doing the job. Seema warns Pratha to complete the job even if she has to stay the whole night.

Later, Pratha is looking for a charger as she wants to inform her fiance Mayank about the whole situation. Rishabh inquires about who she wants to call. Pratha doesn’t want to reveal about Mayank to them and Ritesh comes to her rescue by giving her his phone. Rishabh identifies Pratha’s bag and feels that she may be the same girl. Anya talks to Rishabh about the financial fraud happening in their company. Rishabh calms her down. It is revealed that Pratha will be staying at Gujral’s for about 8 days till the wedding. Pratha calls Mayank who tells her that he wants to meet her. Pratha asks the other manager for leave. The latter asks him to ask Rishabh who got her back on the job.

Shesh Naagin comes to the rescue when the dhol wale don’t come. She sings Tappe and the Gujrals dance enjoying the pre-wedding functions. The minister talks to Shesh Naagin and Urvashi gets furious with him. She confronts him about the whole Naagin thing. Shesh Naagin eavesdrops on their conversation. The minister asks Gujral to meet him in the study room to talk about the business deal. Seema comes and asks about making the business deal on the days of the functions. Shesh Naagin follows and learns that Seema is involved with the business deal with the minister. Elsewhere, the Gujrals are enjoying the pre-wedding functions. Ritesh spots Pratha and goes to talk to her again. Riya gets him away. Pratha asks Rishabh for permission to go out to meet her fiance. Anya reveals the business fraud to Seema. Seema rebuffs her.

Mayank visits Pratha at the Gujral mansion. He is furious with her for not meeting him. Elsewhere Urasvhi complains about Shesh Naagin (she believes her to be security manager/head) to Seema. Elsewhere, Riya is unhappy that Ritesh is not spending much time with her. Rishabh sees this and promises to teach Ritesh a lesson. Elsewhere, Shesh Naagin executes her plan to kill the minister. Rishabh stalls Ritesh from visiting Pratha. Mayank gets furious on seeing Rishabh and Ritesh looking at Pratha. He plans to get Pratha kicked out of her job. He places pieces of broken glasses in haldi. Elsewhere, Shesh Naagin gets a glimpse of all those who are destroying the country. The minister points out to someone and Shesh Naagin believes it to be Rishabh.