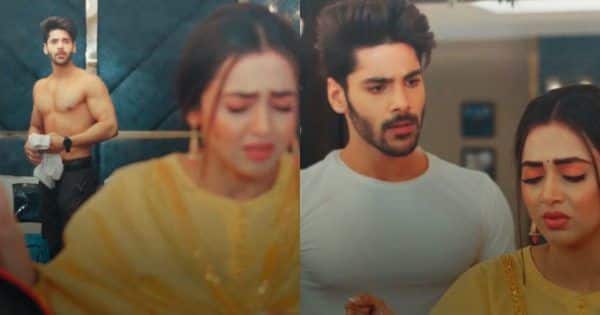 Naagin 6 fans had been kind of doubtful about the chemistry between Tejasswi Prakash and Simba Nagpal. However, the two seem to be gelling well. There were some apprehensions after the first episode but the second one is lit. Today, there was a scene where Pratha (Tejasswi Prakash) bumps into a shirtless Rishabh Gujral (Simba Nagpal). They found it very cute. The sight of a bare bodied Simba Nagpal reminded fans of the Biscuit Boys from Bigg Boss 15. They were good friends on the show. Simba Nagpal is from MTV and knew Karan Kundrra too beforehand. There was a video where he was teasing Karan Kundrra on how he is going to romance Tejasswi Prakash (Pratha) on the show. He said he would not mind as it is Simba Nagpal. Also Read – Naagin 6 13 February 2022 Written Update: Rishabh grows suspicious of Pratha; Shesh Naagin is on the hunt for the man with a wooden leg

Take a look at what fans felt after tonight’s episode. Well, Rishabh Gujral (Simba Nagpal) had his eyes only for Pratha. Take a look at the reactions… Also Read – Naagin 6 Review: As Tejasswi Prakash-Simba Nagpal’s show hit the tube, here’s a look at five things that stand out for good and bad reasons

Not even lying but gosh they’re making such amazing pair guys ? I didn’t expect that! The charishma they both have is so much appreciable!! Can’t really wait for the next episode! ?❤️ #Pratha #TejasswiPrakash#PraRish #SimbaNagpal#Naagin6 pic.twitter.com/r8rcBW3yZJ

On the show, Rishabh Gujral is curious about Pratha (Tejasswi Prakash) as she is one whom he saw with the man. He wants to know if the note is connected to the pandemic. People feel that the couple is looking quite cute. Simba Nagpal is looking damn handsome on the show! Also Read – Karan Kundrra goes an extra mile to prevent oops moment for Tejasswi Prakash; Naagin 6 actress goes aww – watch video