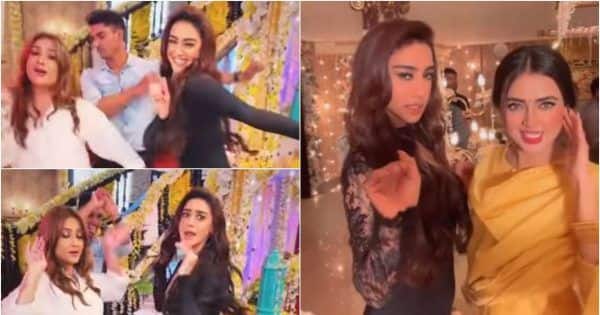 Naagin 6 started airing on 12th February 2022. The show stars Tejasswi Prakash, Mahekk Chahal, Simba Nagpal, Urvashi Dholakia and Sudha Chandran. The first two episodes of the serial received a good response, and Mahekk, Teja, and Simba’s performance has impressed one and all. Till now, we haven’t seen Teja in the Naagin avatar and everyone is eagerly waiting for it. While cast and crew are giving their best to the show, the team is also having a lot of fun on the sets. Also Read – Naagin 6 actress Tejasswi Prakash dishes out girl-next-door vibes in latest pictures; fans apologise to Karan Kundrra for crushing on her

Recently, Mahekk shared a reel on Instagram in which she is dancing with Urvashi to the song Main Naagin. Mahekk captioned the video as, “With my lovelies @urvashidholakia @sidharthsharma1991 When Sid is trying to teach us Naagin Dance and see what happens. Wait till the end This is our Naagin Dance. Make yours and Tag us. #naagindancechallenge #naagin6 #reels #colorstv.” Also Read – Karan Kundrra gets clicked at airport alone; fans say, ‘Missing TejRan’ – View Pics

Last week, Mahekk had posted a video with Tejasswi from the sets of the show. In the video, the two actresses did hissss like Naagin and told their fans to watch Naagin 6. Mahekk had captioned the video as, “With the cutest sister naagin. @tejasswiprakash.”

Tejasswi’s fans have been super excited about Naagin 6. The actress won Bigg Boss season 15, and after the show ended she quickly started shooting for Ekta Kapoor’s show. While Naagin 6 has received a good response, let’s wait and watch how well it will perform further.