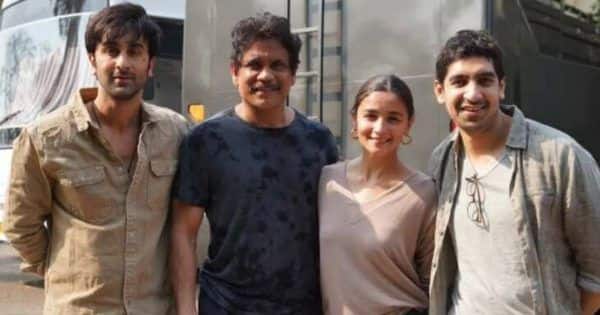 Nagarjuna is currently riding high on the success of his recently released film Bangarraju, which also stars his son Naga Chaitanya in a lead role. The 62-year-old actor recently sat down for a fun chat wherein he was asked to describe his Brahmastra costar Alia Bhatt, Baahubali star Prabhas and ace director SS Rajamouli in one word. And his answers will surely amuse his fans. In an interview with Bollywood Hungama, Nagarjuna called Alia a ‘patakha’, Prabhas a ‘warrior’ and SS Rajamouli a ‘creator’. Also Read – Trending OTT News Today: Pratik Gandhi-Fatima Sana Shaikh to star in desi Modern Love, Lord of the Rings web series title revealed and more

As we all know that Nagarjuna will be seen doing a cameo in Ayan Mukerji‘s upcoming superhero film Brahmastra, which stars Ranbir Kapoor, Alia Bhatt, Mouni Roy and Amitabh Bachchan along with a cameo of Shah Rukh Khan in the film. When Nagarjuna was asked about his role in Brahmastra, the Telugu superstar said that he was skeptical about doing a cameo in the film. Also Read – Shreyas Talpade for Allu Arjun in Pushpa, Sharad Kelkar for Prabhas in Baahubali and other actors who’ve dubbed for South stars in pan-India films – view pics

“I was a little sceptical about doing it in the beginning but then Ayan came home and he presented it to me. I said ‘I just don’t want to do a cameo. No point now’. But when he presented it to me, the whole script, it was amazing, it was brilliant. His vision of the script and the passion they were putting into it. By then, they had shot a bit of it. He showed me, all of that. And I said ‘yes’ instantly, I didn’t even hesitate after that. It’s a very important cameo. I won’t even say it’s a cameo. It’s a very important character,” Nagarjuna said in the same interview. Also Read – Hrithik Roshan, Kareena Kapoor Khan and more drunk Bollywood celebs that will leave you in splits – view pics

Meanwhile, the presence of controversial Andhra Pradesh Cinematography Minister Perni Nani at Bangarraju success bash has irked folks from the Telugu movie industry. The minister has been in the news ever since the movie ticket prices were slashed in the state. Though many movie celebrities met him to discuss the same, there was not much the minister did for the film industry. So it will be very interesting to see what Perni Nani would say at the Bangarraju success meet.