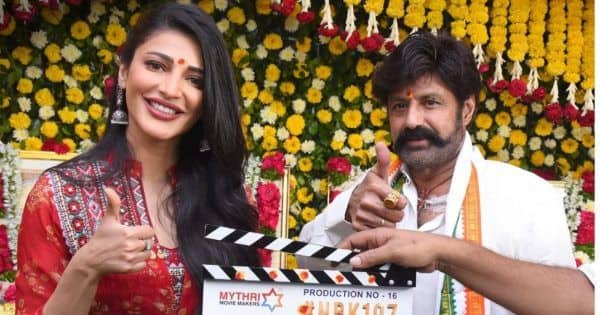 NBK107 sees Natasimha Nandamuri Balakrishna and successful director Gopichand Malineni, who both delivered blockbusters with their last movies, teaming up for what they promise to be a mass treat. Billed to be a pucca mass and commercial film, Tollywood’s leading production house Mythri Movie Makers is bankrolling the project. NBK107’s regular shoot commenced yesterday, 18th February, in the town of Sircilla in Telangana. Word is that the makers are beginning the shoot with a heavy-duty action episode in keeping with what we’ve heard about superstar Nandamuri Balakrishna’s character. Also Read – Trending South News Today: Samantha Ruth Prabhu dances to Vijay’s Arabic Kuthu; Bheemla Nayak digital rights sold for whopping price and more

A well-placed source within the industry has apprised BollywoodLife that Balayya will be seen in a never-before-seen action avatar, a completely different persona hitherto in his repertoire, which Director Gopichand Malineni has carefully conceptualised in a grand manner. Our source further informs us that Nandamuri Balakrishna will join the shoot from day one itself, with action director duo Ram-Lakshman said to have choreographed a larger-than-life action sequence for the initial shots, which are being canned with both the actor and crowd fighters. Also Read – Mithya to A Thursday: 5 new films and shows to watch this weekend on ZEE5, Disney+ Hotstar and other OTT platforms

Apparently, from what we’re hearing is that NBK107 is based on real incidents, set against a fictitious backdrop. Shruti Haasan has been roped in as the female lead while Kannada cinema star Duniya Vijay will be seen in his Tollywood debut as the prime antagonist. Varalaxmi Sarathkumar has also been signed on for a powerful role and talks are on with other talented actors for the other supporting parts. Also Read – Trending South News Today: Pooja Hegde and Naga Chaitanya to reunite after 7 years, Shruti Haasan on being called crazy for taking sabbatical and more

Naveen Yerneni and Y Ravi Shankar will be producing the film on massive scale. Gopichand Malineni’s films are known to be technically high in standard, with some top-notch technicians being roped in for the same. S. Thaman will be rendering the soundtrack and songs while Rishi Punjabi will handle the cinematography. Acclaimed writer Sai Madhav Burra provides the dialogues and National Award-winning editor Navin Nooli takes care of the cuts.