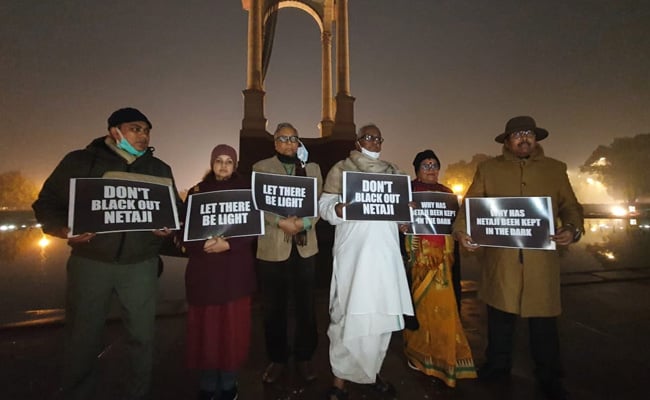 Netaji hologram was also switched off on January 28, 29 due to wind, said officials.

The hologram of Netaji Subhas Chandra Bose was switched off today because of high wind velocity and rain, top sources in the government have told NDTV, adding that they wanted to prevent a “short circuit” and also to protect this “very expensive hologram”.

“As you can see, the hologram was functioning perfectly through the night yesterday and day before. We will operationalise it as soon as wind velocities come down. This is standard precaution anywhere in the world,” a top source in the government, who did not wish to be named, told NDTV.

Trinamool’s Saugata Roy took a swipe at the government in Parliament over the missing hologram.

“Gone with the wind,” he quipped.

The 28 feet-by-6 feet hologram statue is powered by a 30,000 lumens 4K projector. The light is thrown on a high-grain, 90 per cent transparent holographic screen that is not visible to visitors. The hologram will be replaced by a granite statue of the freedom fighter.

The hologram presently acts as a filler in place of iconic Amar Jawan Jyoti or the “eternal flame” for soldiers at India Gate which has been merged with the torch at the National War Memorial.

It was also switched off on January 28 and January 29 due to wind, said officials.

During the Beating Retreat ceremony, which marks the end of Republic Day celebrations, NDTV had tweeted photos of the canopy without the hologram on January 29.