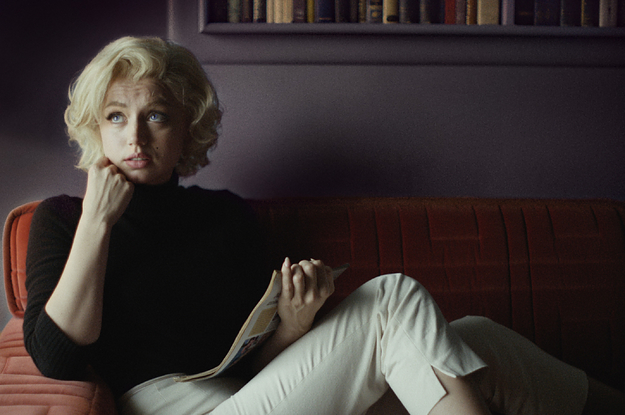 When a life story or myth is as sprawling as Monroe’s, the easiest way to find a new angle is to zero in on a specific period of time or new source material. My Week With Marilyn (2011) charmingly chronicled a seven-day period during the filming of The Prince and the Showgirl to construct a finely tuned portrait of her experiences as an actor and a woman. More recently, miniseries like 2015’s The Secret Life of Marilyn Monroe have turned to books that uncovered new information about her mother Gladys, giving more insight into her role on Monroe’s life.

Dominik wrote Blonde drawing on Joyce Carol Oates’s 2000 doorstopper of a novel. Before she became a social media reactionary tweeting that young white men aren’t getting published enough, Oates had a knack for writing emotionally evocative books about family dynamics and young women’s feelings — like the Oprah-approved We Were the Mulvaneys (1996).

Her attempts to expand into the dark side of Americana with fictionalized novels inspired by, say, Chappaquiddick and JonBenét Ramsey have been less successful. They don’t add any real perspective to the real life stories. Rather than commenting on their cultural metaphors, these books seemed to drown in the media clichés that made these stories famous.

Oates’s fictionalized account of Monroe is also an attempt to contextualize the fantasies attached to her. But it actually trades in something we already knew about stardom — Monroe is a symptom of the pitfalls of celebrity — and tries to shock us with the idea that even the most luminous star is subject to physical mundanities like menstruation. Dominik’s film follows suit.

Like the novel, the movie never decides whether it wants to be a study of Monroe the icon, the actor, or the woman. The film starts with Norma Jeane as a little girl (Lily Fisher), being raised by a mother with schizophrenia, then a little understood mental illness.

Gladys (Julianne Nicholson) pines for an imaginary husband and becomes, alongside Norma Jeane’s absent father, one of the many figures who haunt Monroe, figuring in her life even after she is committed to a long-term hospital stay.

The film’s formal techniques are promising, including its black-and-white starkness, a tense minimalist soundtrack, and the way it avoids linearity, jumping across the myth and the woman in impressionistic scenes. Through its camera angles — scenes are often shot from Monroe’s perspective — the movie succeeds in making the viewer inhabit the young girl’s feelings, evoking the oppressiveness of abuse as Gladys strikes and even tries to drown her.

We meet Ana de Armas’s adult Monroe through meticulous re-creations of her most famous photography sessions and movie auditions, from her pinup era to her starring role as the tormented Ella in Don’t Bother to Knock (1952). De Armas looks exactly like Monroe, and makes the latter’s cooing voice and doe-eyed gaze her own, as convincingly as Michelle Williams did in My Week With Marilyn.

The movie’s most coherent, if obvious, theme is about how all the men in her life used her. We see — and feel — the pain and horror as she’s raped by a studio head who offers her opportunities in to a movie. In a throuple dalliance with Charlie Chaplin Jr. (Xavier Samuel) and his actor friend, and subsequent marriages to characters referred to as The Ex-Athlete (Bobby Cannavale) and The Playwright (Adrien Brody), they are all there to ultimately betray her.

But the themes don’t receive the necessary support from the dialogue, which can be preachy (like when she calls herself a “piece of meat”) or makes characters into banal commentators (her name is “so phony, like you invented yourself,” Chaplin tells her). Monroe as a self-invention icon? Groundbreaking.