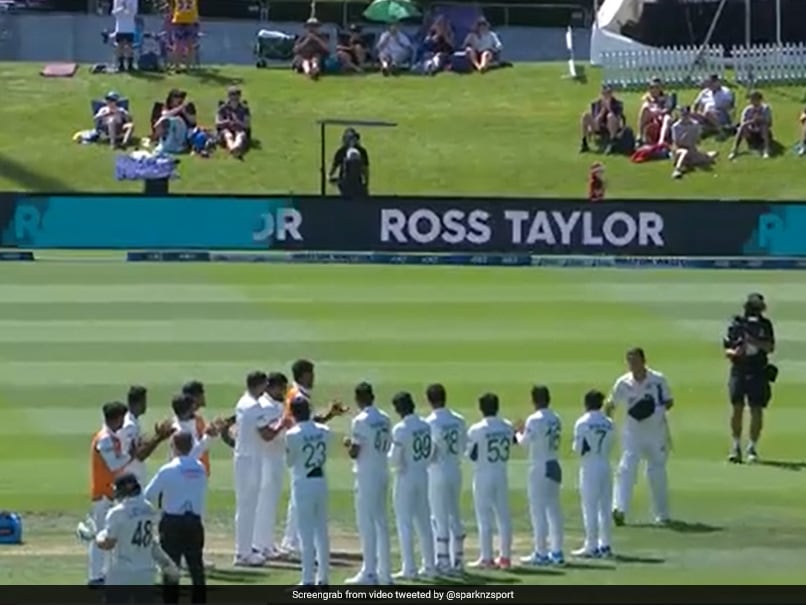 Ross Taylor received a standing ovation from the Hagley Oval crowd and a guard of honour from the Bangladesh team as he walked out to bat in his final Test for New Zealand. With New Zealand scoring a mammoth 521 for six declared in the first innings, and Bangladesh in absolute tatters, it was probably the last sighting of Taylor batting in the longest format. On December 30, Taylor had announced that the series against Bangladesh will be his last in the longest format while ODIs vs Australia and the Netherlands in February and March will be his last in the shorter format.

The New Zealand great, his country’s most prolific run-scorer, walked out to bat with New Zealand 363 for two. Stand-in skipper Tom Latham was batting on 190 at the time.

As Taylor walked out to bat the entire Hagley Oval crowd stood up and applauded him while the Bangladesh team too honoured the New Zealander.

Ross Taylor walks to the middle in his final Test for New Zealand#SparkSport #NZvBAN pic.twitter.com/Xs7XFdsEs8

@RossLTaylor certainly has given a lot to the game of cricket. Spent my secondary and high school watching him played some great innings. Thank you @RossLTaylor for all the priceless memories. #NZvsBan

Great gesture from the Bangers and umps too

What a generational player ! Thank you Ross !

Taylor, however, could only score 28 before he was dismissed by the impressive Ebadot Hossain.

Latham went on to score 252 while Tom Blundell played a 60-ball 57 cameo. Devon Conway had earlier continued his fine start to Test cricket, scoring a brilliant century. In the end, New Zealand declared their first innings on 521/6.

In reply, Bangladesh were in complete tatters as Trent Boult and Tim Southee ran riot in Christchurch.

At the time of writing this, Bangladesh were 103 for six with Boult and Southee taking three wickets apiece.