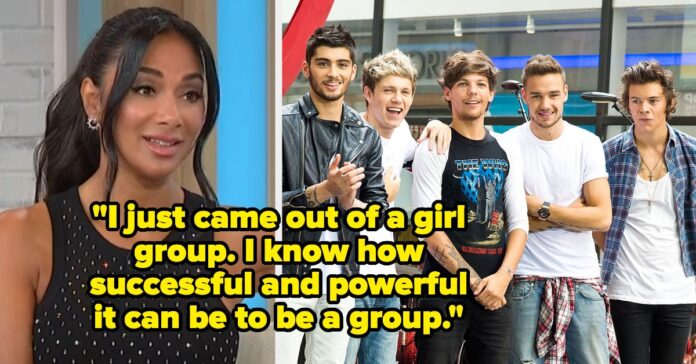 In the video, Simon, Nicole Scherzinger, and Louis Walsh were gathered around a table with contestants’ pictures and deciding who would move forward in the competition. Nicole placed Niall’s picture at the top of the table to start the formation of a boy band. As soon as she saw Harry’s pic, she said, “Oh yes!” and tapped Niall’s pic. “Put him with him.”

Once Louis was added, she exclaimed, “They’re the cutest boy band ever! The little girls are going to love them.”

“This one? Right here,” Nicole said as she placed Liam’s pic in the column to join Niall, Harry, and Louis. Simon said he was the standout audition and asked if Nicole thought Liam’s pic should be moved over to the pile of boys moving forward as individuals instead. “I don’t think so,” Nicole replied. “If he’s the standout, then he could be the leader.”

Sooo, I think it’s pretty safe to say that Nicole was the mastermind behind One Direction.

And she just opened up about it all for the first time!

On a recent episode of Sherri, the talk show host said, “I always thought that it was Simon Cowell who birthed One Direction, until I saw unreleased footage from X Factor of you creating One Direction.”

“Mmhhmm,” Nicole responded. “It’s kind of crazy, Sherri. Honestly, I never thought this footage would see the light of day. I thought Simon burned it,” she said with a laugh.

“And it’s really cool that it came out, because what people are actually seeing is me actually putting them together, the way my mind was working. I just came out of a girl group. I know how successful and powerful it can be to be a group. We’ve gotta join forces.”

“And it’s amazing to think we didn’t have anything at that time. So, I’m super proud that I got to play a small part or a big part–”

“No, you played a big part!” Sherri interrupted her. “Simon Cowell, you oughtta be ashamed of yourself!”

“Every time I see Simon, I’m gonna be side-eyeing him,” Sherri continued.

Keep up with the latest daily buzz with the BuzzFeed Daily newsletter!