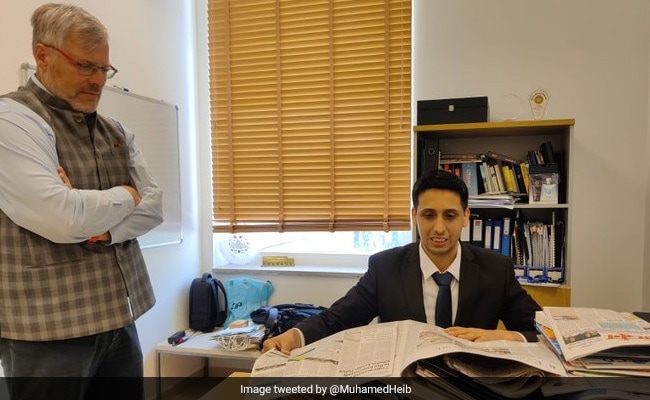 A tweet exchange between Israel Ambassador Naor Gilon and spokesperson of Israeli embassy in India Muhamed Heib is delighting users on the micro-blogging platform. The tweets are centred around opening of offices on Monday, after a long Holi break.

The tweet exchange starts with a post from Mr Heib on March 18, where he is seen posing with the ambassador drenched in colours on the occasion of Holi. “The best part of #Holi is that you can throw and splash on your boss, in this case, Amb. @NaorGilon all the possible colors without getting in trouble. I hope he relished it,” he said in the tweet.

Mr Gilon,Israel’s ambassador to India, Sri Lanka and Bhutan, replies saying, “Sure. No hard feelings @MuhamedHeib. after all it’s #Holi . Waiting for you Monday morning in the office.”

Sure. No hard feelings @MuhamedHeib after all it’s #Holi . Waiting for you Monday morning in the office…🤔 https://t.co/smuob1ubTI

Today, the spokesperson quote-tweeted the ambassador’s tweet on Holi to say, “Well, Monday has arrived and with it the lot of work. Ambassador @NaorGilon asked to summarize a few things and said to start with this pile because a few more things are waiting for us that need to be done #ASAP. Do you think it has anything to do with #Holi?”

The photo shows Mr Heib scanning through newspapers at his desk and the ambassador standing next to him with his hands folded and a frown on his face.

Mr Heib too appears to be in a serious mood.

The ambassador then quote-tweeted Mr Heib’s tweet and said, “As I said @MuhamedHeib no hard feelings. After all it was #holi.”

As I said @MuhamedHeib no hard feelings. After all it was #holi 😀 https://t.co/KPT2CFYgse

The exchange attracted a lot of comments from Twitter users. “Don’t think Muhamad put enough colour and water this time..maybe the next year,” tweeted a user.

““Bura Na Maano, Holi Hai” in action,” said another. A third user posted: “You are such a sport, Ambassador.”

Last week, Ambassador Gilon extended his wishes to the people of India on Holi 2022. He also mentioned about Purim, the Jewish festival of colour.

Mr Gilon said it is great to see “how similar the cultures of both our nations are”.