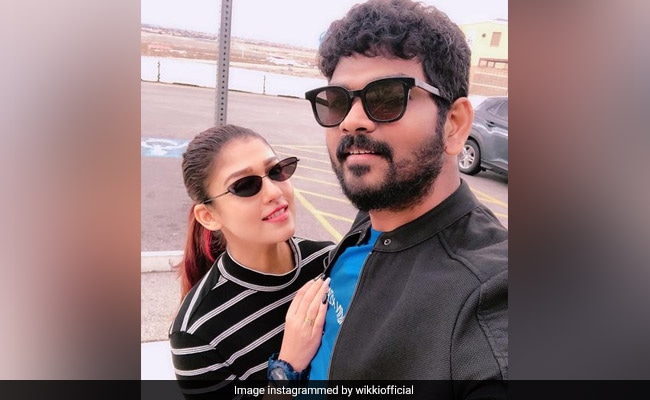 Vignesh Shivan shared a perfect “Throwback Thursday” post. The post is a photo of Vignesh with Nayanthara. The two can be seen smiling for the camera in the photo. Vignesh looks dapper in a blue t-shirt and black jacket and Nayanthara perfectly complemented him in a black and white striped t-shirt. Vignesh Shivan has shared the photo with an array of red heart emojis and wrote, “#throwbackthursday.” The photo has close to two lakh likes and fans can’t keep calm looking at their favourite couple. “Omg! literally goals,” commented a fan. Another one called them, “Cuties.” Vignesh Shivan’s comment section is filled with red heart emojis.

Check out the photo:

Last year, Nayanthara was seen wearing a ring on her ring finger and it had sparked engagement rumours. Later, Nayanthara had confirmed her engagement with Vignesh Shivan on a chat show. When she was asked about the ring on her ring finger, Nayanthara, in an interview with chat show host Dhivyadharshini for Vijay Televsion, had said, “Yes, it is my engagement ring. We got engaged during the lockdown. We are very private people so, only immediate family members attended my engagement. But for the wedding, we will be informing everyone.”

Vignesh Shivan and Nayanthara fell in love with each other on the sets of Naanum Rowdy Dhaan in 2015. Vignesh is often seen sharing mushy and love-filled photos with Nayanthara.

On the work front, Nayanthara will be next seen in Vignesh Shivan’s Kaathu Vaakula Rendu Kaadhal. The film also stars Samantha Ruth Prabhu and Vijay Sethupathi. The teaser of the film will release on February 11. Kaathu Vaakula Rendu Kaadhal has been produced by Seven Screen Studio in association with Vignesh Shivan’s home production house, Rowdy Pictures.