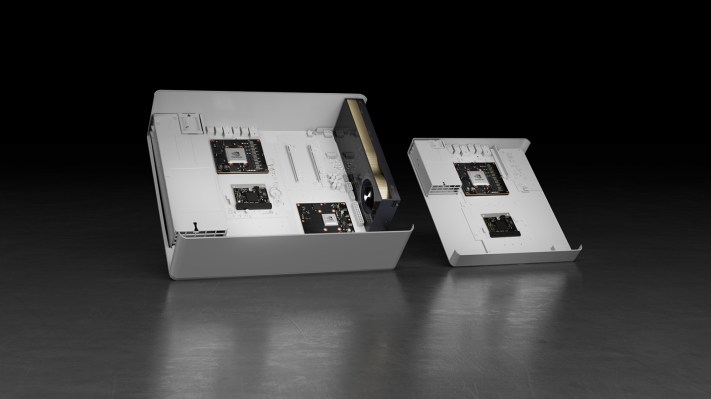 Clara Holoscan MGX, debuted at the Nvidia’s 2022 GTC conference, is an “open, scalable robotics platform,” as CEO Jensen Huang put it in a keynote address. It’s a hardware and software stack designed to help connect robotic medical devices or sensors, with AI applications.

How might that work? Take the process of endoscopy as an example. Typically, a doctor will insert a small camera inside your body and take a look around. Clara Holoscan MGX can connect directly to that camera, and process the data that’s being collected in real time. That data could then be fed into AI models that could detect anomalies, navigate through your anatomy, and help the surgeon come up with a treatment plan. (To be clear, these AI models wouldn’t be made by Nvidia, just run on their hardware.)

Nvidia is already well-known for its’ GPUs, which are especially good at quickly running computations in parallel. GPUs were once best known to gamers, but they’ve become a key accelerator for any industry interested in training deep neural networks. Deep neural networks need to quickly crunch billions of data points as they learn to, say, read an X-ray. And the resulting models need a lot of computation to be used in real time as well — which this platform is aimed at providing.

Nvidia is now a dominant player in the AI space because it supplies the raw computational strength needed for many of these projects, and it has made doing so easy with a fleet of industry-specific hardware and software combos. For instance, NVIDIA has been active in the self-driving car space with projects like Nvidia Drive, a platform for the training and building of autonomous vehicles.

Nvidia has already started making overtures into the healthcare space. The Clara platform was first announced in 2018, and was initially designed to create a smooth medical imaging experience. The platform has been expanded over the years, but the Clara Holoscan MGX platform is meant to basically become a one-stop shop.

Powell says that Clara Holoscan’s core innovations are twofold. First, it’s been designed to comply with the IEC 62304 standard, which is a benchmark process for the safe development of medical software. Then, it’s basically packed with what Huang calls “an insane” amount of computing power.

Together, the combination should allow companies looking to build or train AI powered medical devices to move forward much faster.

“The architecture of Clara Holoscan significantly reduces the engineering investment needed to bring a new medical device or software as a medical device to market,” Powell said.

There are plenty of companies already out there looking to do exactly what Nvidia is pitching: combine devices and AI. Activ Surgical, for example, a startup working on AI-assisted surgical scopes (called ActivSight) already uses Nvidia’s GPU and is working on more AI applications informed by scope data. To do this, the company was accepted into Nvidia’s Inception program, which gave it early access to the Clara AGX Developer Kit. That kit, per a press release, echoed Powell’s assertion that Nvidia’s tech can speed up product development.

“The developer kit will also reduce the overall development time to bring future Activ Surgical products, including ActivSight, to market in the next two years,” Activ Surgical’s release reads.

At the moment, the full powers of Clara Holoscan aren’t available. During his keynote address Huang said the medical-grade technology won’t be available for early access until Q1 2023. At that point, Powell added, hardware pricing will be set by Nvidia’s ODM partners, and software pricing “will be made available.” (That information will likely appear here.)

For now, the launch of Clara Holoscan MGX seems like a reinforcement of Nvidia’s already firm foothold in the AI healthcare space. Basically, it’s building the computational bedrock that sits beneath it.

And that’s a good place to be. According to Stanford’s 2022 AI Index report, the two greatest areas of private investment in AI sat right in these crosshairs in 2021: $12.2 billion in data management, processing and cloud computing, and $11.29 billion in medical and healthcare tools.