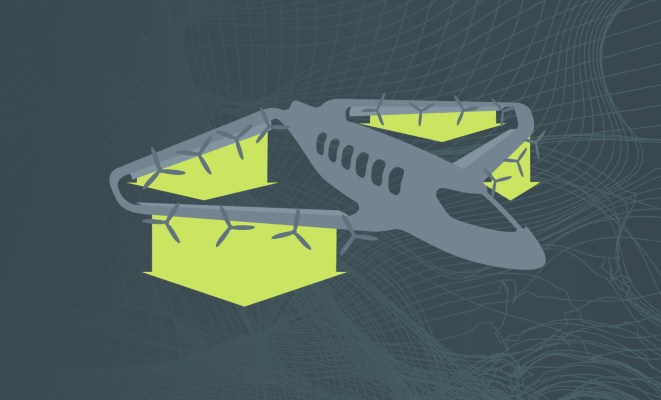 A startup hoping to reinvent regional air travel with an unusual vertical-takeoff aircraft has rebranded and raised a $12.4M funding round. Craft Aerospace will henceforth be known as Odys Aviation, and the money will go towards, among other things, a planned demonstration flight this year with a one-passenger prototype.

The interesting “blown wing” approach to VTOL craft is characterized in detail in this post, but in brief it bends the wing in such a way that the thrust from the rotors can be directed downward as well as rearward in a minutely adjustable fashion. It’s been tried before, but not on this scale — but Odys thinks the combination of box wing and high flap makes it not just possible but uniquely suited to short hop air travel.

The aircraft will theoretically carry nine passengers and two pilots, fly at 30,000 feet and about 345 mph, and have a range of up to 1,000 miles. That makes it potentially a good option for such frequent commutes as LA-SF, Tokyo-Osaka, and NY-DC. Of course, first it’ll need a place to land and take off — currently the company is working with Mojave Air and Space Port, but there are other arrangements in the offing.

“Integration at smaller airports is already very practical,” said co-founder and CEO James Dorris. “We have collaborated with two vertiport developers to ensure our aircraft can practically land at their facilities, and we’re also in discussion with one of the US’ largest airports to assess airspace integration issues.”

Depending on regulations and infrastructure, the planes might land at regional airports (often closer and less busy than major ones) or at dedicated facilities closer to city centers. Those are still rather hypothetical, but it seems every startup looking to get into non-traditional flight models is counting on them existing at some point.

Odys is still in sub-scale prototype testing — of which I’ve seen video, though they have not shown it publicly — but test flights are being penciled in. “We will fly the next scale prototype (effectively a 1-seater) later this year. The 1st full-scale prototype flight tests are still scheduled for late 2023,” said Dorris.

Of course a $12.4 million infusion will help make that a reality. This is being characterized as a seed round: though I reported the company had raised $3.5M last year, that was split into a $1.3M pre-seed and some of the current round — for those keeping track. The funding came from Giant Ventures, Soma Capital, Countdown Capital, Nikhil Goel and Kyle Vogt.