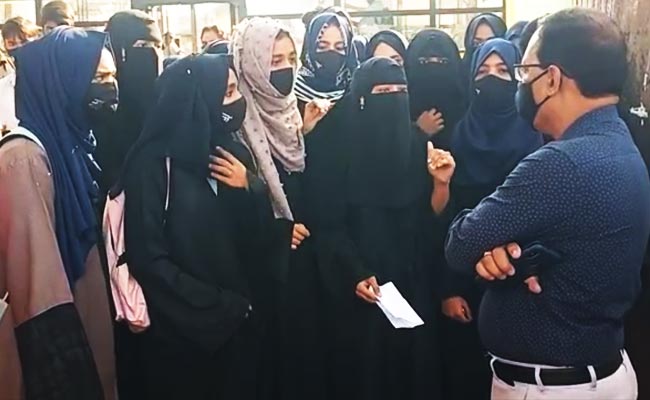 Students of a Karnataka college were not allowed to attend classes wearing a Hijab, the second such controversy in the state this year.

In a video, which is going viral on social media, students of a pre-university college in Karnataka’s Kundapur coastal town of Udupi district can be seen pleading before the principal. The students request the college principal to allow them to attend classes wearing the hijab.

They also tell him that their exams are just two months away, and why is the college creating an issue on wearing the hijab now.

Until now, the norm in the state was that students were allowed to wear the hijab in college, but they would remove it inside the classroom.

Speaking to reporters in the district, S Angara, Udupi district-in-charge minister said that a status quo should be maintained until a further decision is taken.

“I will hold discussions with the district administration. It’s difficult to draft separate rules for every college. But if that’s been done, the government will take an informed decision. But I have a request. I have called for a meeting with the stakeholders,” Mr Angara said.

The issue started on Wednesday when some girls attended college wearing the hijab. This prompted 100 boys to wear saffron shawls.

The college administration held a meeting with Kundapur MLA Haladi Srinivas Shetty and arrived on a decision that students will have to stick to a uniform rule. However, the female students who remain firm on their stand were barred from entering the college.

This is second such incident that’s been reported from Karnataka in the last two months.

The first instance occurred at the PU Girls College in Udupi a month ago, where the students are still fighting to be allowed to sit in a class wearing a hijab.

One of the students has moved the High Court with a prayer to allow the right to wear a hijab, or headscarf, inside the classroom.