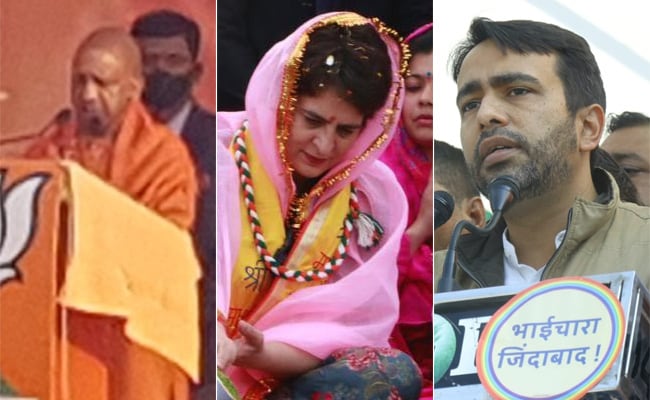 Tuesday was the last day of campaigning for first of the seven-phase Uttar Pradesh assembly elections, which will start from Friday. As campaigning ended, top leaders from across parties were seen campaigning in western UP, where people will vote for 58 seats spread across 11 districts.

UP Chief Minister Yogi Adityanath campaigned in Moradabad, Amroha, Modinagar and Jewar. At his rally in Jewar’s Rabupura, he reminded people of BJP’s development projects while hitting out at other parties.

“Jewar airport is being made here and it will be among the world’s biggest airports. We are even going to bring the whole of Mumbai here as we are making a Film City. During Samajwadi Party’s rule there was no electricity. And even the handpump has dried up (handpump is the Rashtriya Lok Dal’s symbol). Earlier governments focused on making pistols but we are making a defence corridor,” Yogi Adityanath said.

The Congress in-charge for UP Priyanka Gandhi Vadra carried out door-to-door campaigning in Hastinapur and campaigned in Mathura, where she was seen offering prayers at Vishram Ghat on the Yamuna.

Other Congress leaders like Shashi Tharoor were seen campaigning in Noida where he accused the BJP of divisive politics in the campaign.

RLD chief Jayant Chaudhary campaigned in Garh Mukteshwar assembly seat of Hapur, where he attacked Yogi Adityanath. “A baba from Gorakhpur would like to come and spoil our family here in western UP. They would like to spoil our harmony. They will say that we will cool you all 20 per cent down and take off all your heat. I am giving an answer to him.  But you all also have to give him an answer on February 10,” Mr Chaudhury said.

Western UP is being touted as one of the toughest battles in the UP elections as BJP is battling an unpopularity perception after the nearly year-long protest against farm laws. In the 2017 election, BJP had a 76 per cent strike rate in west UP seats.

The Jat-Muslim factor is crucial on west UP seats. The communities had parted ways after the Muzaffarnagar riots, but opposition parties are hoping that in light of the farmers’ protests, there will be consolidation between these two communities.

Jat-dominated constituencies like Meerut, Shamli, Baghpat and Muzaffarnagar will vote on February 10. Kairana will also vote on this day. This was the place where Home Minister Amit Shah raised the issue of “Hindu exodus” while campaigning.

Mathura, where the Krishna Janmabhoomi temple remains a campaign issue, will vote on Thursday, so will National Capital Region, or NCR, areas like Ghaziabad and Noida.