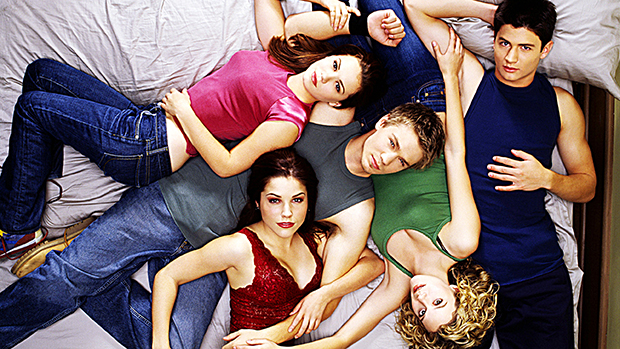 ‘One Tree Hill’ premiered on Sept. 23, 2003. The series has become one of the most beloved teen dramas of all-time, and fans still love the cast 19 years later. So, what is the cast doing today?

On Sept. 23, 2003, TV audiences went to Tree Hill and didn’t leave for another 9 years. Over the course of 9 seasons, the young cast of One Tree Hill grew up before our eyes — onscreen and offscreen. They went from teenagers to adults (particularly thanks to that season 5 time jump). One Tree Hill came to an end in 2012 and the show’s main stars have taken on new roles, had kids, and more.

But the cast hasn’t forgotten how they got their start. In fact, stars Sophia Bush, Hilarie Burton, and Bethany Joy Lenz have kept the OTH spirit alive with their rewatch podcast Drama Queens. And the trio also surprised fans with mini-reunion of Sophia’s show Good Sam in Mar. of 2022.

See where the beloved One Tree Hill cast is now.

Chad Michael Murray, 40, starred as Lucas Scott through season 7,  but he did come back for an appearance in the final season in 2012. In the years since One Tree Hill, Chad has taken on a number of notable TV roles on Star, Agent Carter, and more. He most recently starred as the manipulative Edgar Evernever on Riverdale. Additionally, he’s appeared in a slate of Hallmark and Lifetime Christmas films, including Write Before Christmas that also starred fellow OTH alum Torrey DeVitto. Chad is now married to Sarah Roemer, and they have two kids together.

James Lafferty, 36, starred as Nathan Scott from One Tree Hill’s start to its end. After One Tree Hill, James had a notable recurring role in the first season of Underground. He went on to direct an episode of The Royals season 2 and directed more episodes in season 3. He appeared in 4 episodes of Netflix’s The Haunting of Hill House and created the episodic comedy project Everyone Is Doing Great alongside OTH co-star Stephen Colletti, 34. He most recently appeared in the HBO sports series All American in 2022. The actor got engaged to actress Alexandra Park, 31, whom he met on the set of The Royals, in Sept. 2020.

Hilarie Burton, 39, played the beloved Peyton Sawyer from 2003 to 2009. After One Tree Hill, Hilarie starred in a number of movies and had several recurring roles on shows like White Collar, Grey’s Anatomy, Forever, and Lethal Weapon. She has also starred in a number of Lifetime and Hallmark movies. In and 2018 and 2019, she reunited with multiple OTH co-stars in the Lifetime Christmas movies The Christmas Contract and A Christmas Wish. Hilarie last starred as Margot in Council of Dads and co-hosted Friday Night In With the Morgans. She’s also had guest appearances on The Walking Dead and Good Sam. Hilarie married actor Jeffrey Dean Morgan, 55, in Oct. 2019 after dating several years and two kids together.

Sophia Bush, 39, played Brooke Davis through One Tree Hill’s 9-season run. She went on to star as Erin Lindsay on Chicago P.D. for 4 seasons before leaving the show. She recently had a recurring role on Love, Victor. Sophia voiced the role of Voyd in the 2018 Disney Pixar film Incredibles 2. The star stepped back onto the small screen in Jan. 2022 when her CBS show Good Sam premiered. Sophia has also dedicated her time to social activism and supporting women through the Time’s Up movement. She is currently the host of her own podcast, Work In Progress.

Bethany Joy Lenz, 40, starred as the beloved Haley James Scott for all 9 seasons. A year after the show ended, Bethany booked a recurring role on Dexter. She has appeared in a number of TV shows like Grey’s Anatomy, Colony, and more. She also played Keri Allen on the USA Network series Pearson in 2019, which lasted for one season. Bethany has also starred in a number of Hallmark movies and released albums and EPs in the years since One Tree Hill. She is also part of the Drama Queens podcast with her former castmates Sophia and Hilarie

Everyone loved to hate Dan Scott. Paul Johansson, 58, played the character perfectly over OTH’s 9 seasons. In the years after the show, Paul appeared in multiple TV shows like Mad Men, Beauty and the Beast, Bones, and more. He has starred in a few TV movies as well. He played Dmitri on Van Helsing from 2016 to 2018. His most recent gig was a guest-starring role on NCIS in 2020.

Barbara Alyn Woods, 60, appeared in over 100 episodes of One Tree Hill as Deb Scott, the mother of Nathan Scott and later ex of Dan Scott. In the years since OTH, Barbara has mostly dedicated herself to raising her three daughters: Natalie, Emily, and Alyvia Alyn Lind. She is currently part of the cast of the horror TV series Chucky, based on the Child’s Play series.

Moira Kelly, 54, played Lucas Scott’s mom on One Tree Hill from 2003 to 2009. After One Tree Hill, Moira starred in two Lifetime movies and had a 3-episode arc on The Resident as Annie. She appeared on the teen drama Panic during its one season run in 2021.

There was no one quite like Marvin “Mouth” McFadden. Lee Norris, 40, starred as the fan-favorite character from season 1 to season 9. After OTH, Lee appeared in films Gone Girl and Greyhound. He reprised the role of Minkus in the Boy Meets World spinoff Girl Meets World. He also appeared in two episodes of The Walking Dead in 2017.

Antwon Tanner, 46, played Antwon “Skills” Taylor in over 100 episodes of One Tree Hill. In the years since OTH, Antwon has appeared in a number of films and TV shows, including Lucifer, The Rookie, and more. He notably starred as Lyle in the TV series Get Shorty and Jason in Black Jesus. He reunited with some of his OTH cast members in the Lifetime movies The Christmas Contract and A Christmas Wish.

Craig Sheffer, 61, played Keith Scott until season 3. Keith was Lucas Scott’s uncle and a father figure to him. Keith’s death, at the hands of his own brother, remains one of the most devastating TV deaths. Craig has gone on to star in a number of films, The Mark, Widow’s Point, and Code of Honor with Steven Seagal.