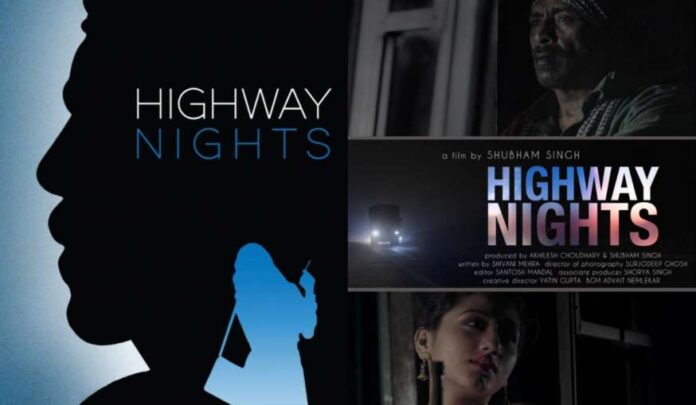 Among the many social tragedies left as remnants of the British Raj in India is the tradition of prostitution prevalent among the Banchhara tribe found in Madhya Pradesh. “Highway Night” is a hopeful take on the troubling reality that burning issues rarely find their prominence. “A real-life incident at a dhaba (highway refreshment shack) inspired me to make a film on the issue”, reflects Singh. National Award-winning filmmaker-actor Prakash Jha in an interview with IANS Life said, “Highway Night is a film with an important message and I hope it reaches audiences across the globe with theatrical, digital and television broadcasts ” He plays an overworked, underpaid but tireless truck driver who on one of his transport routes encounters a spunky young girl played by Majel Vyas.

She develops an instinctive trust in her father’s conduct. A heartwarming tale of kindness, humanity and empathy in a hostile environment where sex workers are generally not seen as human beings. Meaning it all started with a desperate measure by British Raj officials to combat mass unemployment inflicted on the Bachhra tribe as punishment for the murder of a British soldier by a tribal. But now how deep does this business go? Gone as a tradition. The men of this tribe are passing it on for generations in the garb of tradition. The Banchhara are not in fact the only tribe that has adopted this as an accepted occupation. The Naat community in UP was listed under the Criminal Tribes Act of 1871 by the British, which forced their women to end up with prostitution as their only source of livelihood.

Nat Purva has long been known as “Bastard Village” by the people there. ‘Devdasis’ in the southern states of India followed the same ritual, except that they would be “married” to a local deity. Where the temple priests could exploit them for being “female servants of God”. The Wadia community in Gujarat celebrates the birth of a girl child as she is known as another breadwinner for the family. The tribe raises their daughters with an agenda of training them to become professional prostitutes. In his research prior to the film, Singh also noted that most of these tribal girls are raped by their family members such as fathers, uncles and brothers before being sold into brothels. “People do not consider prostitution or people engaged in this business as human beings. It was this harsh reality that prompted me to speak out on this issue. Sex workers are human just like you and me.

Their lives and dreams are equally important,” Singh said. He credits his entire crew, including writer Shivani Mehra, associate producer Elisha Kreis and producer Akhilesh Chowdhary, for their hard work and belief in the project, which is essential to good cinema – spreading awareness through entertainment and visuals. “As a girl born and brought up in India, I have always felt the need to address issues surrounding women in India. The film highlights how discrimination in terms of education and rights of indigenous tribal women leads to unemployment and inequality”, says associate producer Kriss. The film has received critical acclaim and was nominated for Best of India Short Film The festival is slated to be awarded the Grand Jury Prize in 2021 as well as India’s highest award in the field of cinema, the Dadasaheb Phalke Award 2022. A Hollywood release for the film is expected soon in LA, USA.