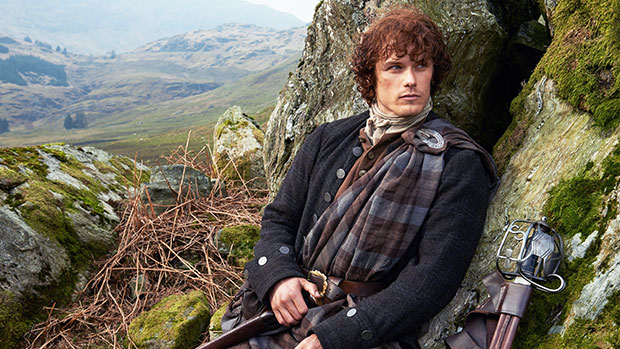 Don’t expect Sam Heughan to be rocking Jamie Fraser’s red hair in real life any time soon. The actor revealed that his hair actually turned purple after he dyed it red so many times for ‘Outlander.’

Every Outlander fan loves Jamie Fraser’s signature red hair. While in recent seasons, Jamie’s red hair has been mostly pulled back, Jamie continues to sport the Fraser red. Sam Heughan used to dye his hair red while filming Outlander, but he revealed to InStyle that “[my hair] got dyed so many times it eventually just wouldn’t hold the color and it turned purple.”

Sam’s natural hair is actually dirty blond. The 41-year-old actor now wears wigs when he’s filming the show. On Outlander, Jamie’s hair is past his shoulders. In real life, Sam sports a much shorter cut.

Back in 2017, Sam admitted that it was “hard being a ginger” because he had to dye his hair so much for Outlander. “It’s pretty horrific,” he told PEOPLE about dyeing his hair red. “I have to get it dyed a crazy amount — it’s like every three weeks. It’s not easy. It’s hard being a ginger. But I think everybody has a little bit of ginger in them. I’ve got some in my beard.”

The actor also revealed in his InStyle interview that he asked to bring in intimacy coordinator Vanessa Coffey while filming the sixth season. Outlander has been known for its steamier scenes, particularly between Jamie and Claire, since day one. Until season 6, the show never had an intimacy coordinator.

“The industry changed since we started, and I just kind of realized how Caitriona [Balfe] and I, from the beginning, really had to sort of find our way through it,” he said. “A lot of pressure was on us to make these scenes work.”

Outlander is currently in the midst of its sixth season. You don’t have to worry about a permanent Droughtlander, thankfully. The hit STARZ series has already been renewed for season 7 and will begin filming again later this year. Outlander season 6 airs Sundays on STARZ.