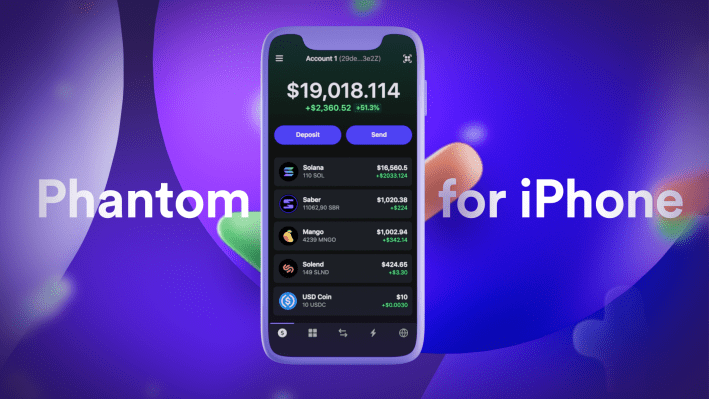 In the crypto ecosystem, wallets are perhaps the most critical user touchpoint serving as a gateway to exchanges and smart contracts. This positions the startups building popular wallet apps closest to the firehose of consumer crypto opportunities, while also leaving them to take charge in tackling many of web3’s unsolved problems including steep onboarding challenges and a hostile fraud environment.

Phantom, one of the premiere wallet apps for the Solana ecosystem, has seen plenty of momentum as the result of investor and developer attention being paid to the Ethereum competitor which has seen its value explode over the past year — though the relative newcomer is also proving to be a more volatile bet with the token taking a particularly rough hit during the most recent crypto crash.

The San Francisco crypto startup is turning this Solana attention into a fat $109 million funding round led by Paradigm on a $1.2 billion valuation. The monster unicorn round comes six months after the startup closed a $9 million Series A from Andreessen Horowitz. At the time, the startup had 40,000 active users, now they have 2.1 million, with CEO Brandon Millman noting that the company has been consistently onboarding about 100,000 users per week.

Phantom’s next big ambition is to go multi-chain and add support for another blockchain beyond the Solana ecosystem to its wallet. The startup isn’t indicating where exactly it’s aiming to focus resources other than that it’s looking to add support for a blockchain compatible with Ethereum’s EVM stack where most crypto developers have been focusing their attention and where competitors like MetaMask loom large.

Multi-chain compatibility means expanded opportunities, but also means dealing with the headaches of multiple ecosystems, something that could be a challenge for Phantom which has around 20 employees currently — though the team plans to scale with its new funding.

“As the party that’s closest to the end user, we definitely have a responsibility to protect and educate users. A lot of the work that we’ve spent in the past couple months has been around user safety-related features.” Millman tells TechCrunch.

The company is scaling up its presence on mobile, announcing alongside the funding news that they are rolling out an iOS app widely and will be releasing an Android native app in the coming months. The apps, which accompany Phantom’s site and Chrome extension, are part of efforts designed to bring a new wave of consumers into the crypto space, though plenty in the ecosystem are still questioning whether the web3 space is ready for a wave of less technical players.

“I’d say the entire space is really early from all perspectives and I think no one really knows how all of this is going to shake out,” Millman says. “It’s still very, very much geared towards professional users all across the stack… and it’s typically something that people kind of wave around and say ‘it’s not for consumers yet,’ but we actually want to help be the team that bridges the gap.”