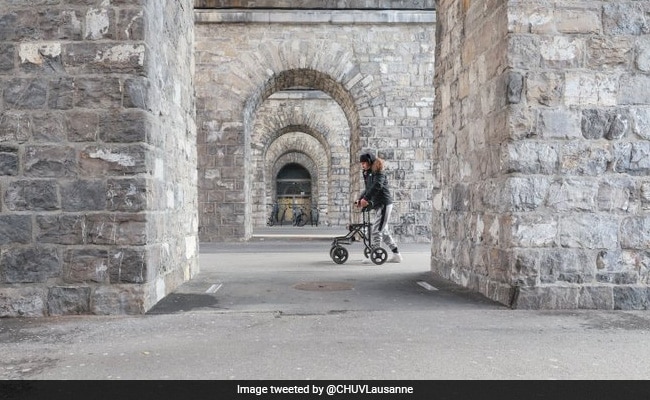 The three men in the new trial were all injured at least a year before the implant.

In 2017, Michel Roccati was in a motorbike accident that left his lower body completely paralysed. In 2020, he walked again, thanks to a breakthrough new spinal cord implant.

The implant sends electrical pulses to his muscles, mimicking the action of the brain, and could one day help people with severe spinal injuries stand, walk and exercise.

It builds on long-running research using electrical pulses to improve the quality of life for people with spinal cord injuries, including a 2018 study by the same team that helped people with partial lower-body paralysis walk again.

“It was a very emotional experience,” Roccati told journalists of the first time the electrical pulses were activated and he took a step.

He was one of three patients involved in the study, published Monday in the journal Nature Medicine, all of them unable to move their lower bodies after accidents.

The three were able to take steps shortly after the six-centimetre implant was inserted and its pulses were fine-tuned.

“These electrodes were longer and larger than the ones we had previously implanted, and we could access more muscles thanks to this new technology,” said Jocelyne Bloch, a neurosurgeon at the Lausanne University Hospital who helped lead the trial.

Those initial steps, while breathtaking for the researchers and their patients, were difficult and required support bars and significant upper body strength.

But the patients could start rehabilitation immediately, and within four months Roccati could walk with only a frame for balance.

“It’s not that it’s a miracle right away, not by far,” cautioned Gregoire Courtine, a neuroscientist at the Swiss Federal Institute of Technology who led the research with Bloch.

But with practice, Roccati can now stand for several hours and walk nearly a kilometre. The Italian described being able to look clients in the eye, have a drink at a standing table and take a shower standing up thanks to the implant.

He and others in the trial were also able to climb stairs, swim and canoe.

‘I see the improvement’

The improvements depend on the electrical stimulation, which is triggered via a computer carried by the patient that activates a pattern of pulses.

Two of the patients can now activate their muscles slightly without electrical pulses, but only minimally.

By comparison, some patients with partial lower body paralysis treated in an earlier study are able to move their previously immobile legs and stand without stimulation.

The three men in the new trial were all injured at least a year before the implant and Bloch hopes to trial the technology sooner after an accident.

“What we all think is that if you try earlier it will have more effect,” she said.

There are challenges: in early recovery, a patient’s capacity is still in flux, making it hard to set a baseline from which to measure progress, and ongoing medical treatment and pain could hamper rehabilitation.

So far, the implants are also only suitable for those with an injury above the lower thoracic spinal cord, the section running from the base of the neck to the abdomen, because six centimetres of healthy spinal cord is needed.

The idea of using electrical pulses to address paralysis stemmed from technology used to regulate pain, and the researchers said they see scope for further applications.

They have also shown it can regulate low blood pressure in spinal cord injury patients and plan to soon release a study on its use for severe Parkinson’s disease.

The team cautioned that significant work remains before the implant is available for treatment outside clinical studies, but said they receive around five messages a day from patients seeking help.

They next plan to miniaturise the computer controlling the pulses so it can be implanted in patients and controlled with a smartphone.

They expect this to be possible this year, and have plans for large-scale trials involving 50-100 patients in the United States and then Europe.

Roccati said he activates the implant daily at home and continues to get stronger.

“I see the improvement every day,” he said.

“I feel better when I use it.”