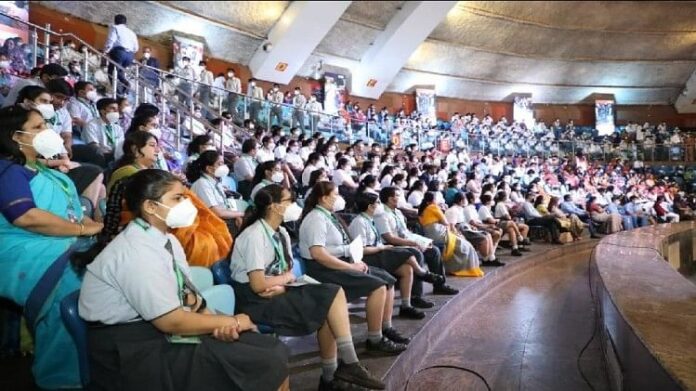 Union Education Minister Dharmendra Pradhan said on Tuesday that 20 lakh questions have come regarding ‘Pariksha Pe Charcha’ with Prime Minister Narendra Modi on January 27 at Talkatora’s Indoor Stadium. Most of these questions have asked suggestions to remove the stress from the family. NCERT is selecting the questions. The Prime Minister will take around 6 to 8 questions this year.

For the first time, 16 lakh students will be from the rural areas of the State Education Board. 200 students have been selected for the program. Out of this, 102 students from across the country and 80 winners of Kala Utsav are being included. The Union Education Minister informed about Prime Minister Narendra Modi’s annual program ‘Pariksha Pe Charcha’ 2023 and the enthusiasm of the board students appearing for the exams. He said that the exam season is about to begin. That’s why students, teachers and parents want to get tips to beat exam stress in ‘Pariksha Pe Charcha’ with Prime Minister Narendra Modi. Pariksha Pe Charcha is continuously increasing the number of registrations of students. Around 38.80 lakh students have registered in the program this year.

13 editions of Exam Warriors, in 13 languages

The Union Education Minister informed that PM Modi’s book ‘Exam Warriors’ has been translated into all major 13 Indian languages. There have been 13 editions of this book. It is dedicated to 32 states and union territories. In these stressful times, talking about and sharing uncomfortable and confusing thoughts helps reduce students’ stress and anxiety to a great extent. It is an effort to provide a platform to students, parents and teachers to share their views and receive guidance and valuable suggestions from the PM.

Pradhan told that 200 students participating in ‘Pariksha Pe Charcha’ from all over the country will reach Delhi on Wednesday. This student will be the first to see the Republic Day Parade on 26th. Will talk with the Prime Minister on ‘Pariksha Pe Charcha’ on January 27. After this, Kartavya Path, PM Museum, War Memorial, Rajghat, Always Atal (Atal Samadhi Sthal) will be shown on January 28. He will also be the guest of the Beating Retreat on 29th January. Apart from this, will also visit Delhi.

NCERT has got 20 lakh questions. In this, most of the children have asked their questions on the stress they get from the family, suggestions to relieve stress etc. In the stress of meeting the family, the children have asked that the parents expect from them on the basis of their dreams, family or the children of the neighborhood. No one wants to know what they want, they don’t want to make a future in medical and engineering, but no one wants to listen.