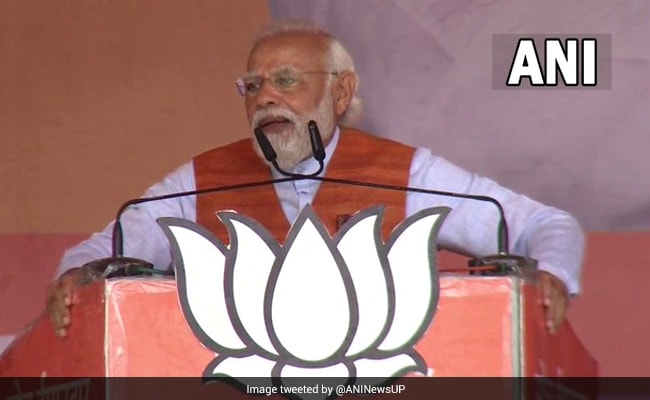 BJP worked hard for five years, but between 2014, 2017 these ‘paraivarvadis’ did not support him: PM Modi

In a veiled attack on Samajwadi Party, Prime Minister Narendra Modi on Sunday said that between 2014-2017 the ‘parivarvadis’ did not let him work for the people of Uttar Pradesh.

Addressing a public rally in Hardoi, the Prime Minister said that the people of Hardoi will celebrate the first Holi on March 10 with the bumper victory of the BJP.

“People of Hardoi have made preparations to play Holi twice. First Holi will be played with BJP’s bumper victory on 10th March. But if you want to play Holi on 10th March, you will have to make arrangements at polling booths,” said PM Modi.

“Today in the third phase too, without any division, heavy voting is being held on the lotus symbol. The news that we have received so far is very encouraging,” he added.

PM Modi said that BJP government is for poor, farmer and youths of the country.

“The double engine government you voted for does not belong to any family not the government at the Centre. Our government is for poor, farmer and youths,” PM Modi said.

PM Modi said that the BJP government worked hard for five years, but between 2014 and 2017 these ‘parivarvadis’ did not support him.

“I am sad that from 2014-2017 these ‘parivarvadis’ did not support me. I am an MP from UP, but till 2017 they didn’t let me work for the people of UP. If you bring them again, will they let me work for you? Should such people be re-elected?” he added.

“Five years ago, what mafias did to the UP? Traders were afraid to do business. Snatching, loot was common at that time. People used to say, “Diya baree ghar wapas aa jao” (Come back home before the Sunset). These ‘parivarvadis’, who were losing the election badly, will now spread poison in the name of caste. Such people fight with their own families for a chair, but you have to remember only one thing- UP’s development, is the country’s development,” said PM Modi.

Polling in 59 constituencies for the third phase of the Uttar Pradesh elections is underway.

Subsequent phases are taking place on February 23, 27, and March 3 and 7. The counting of votes will be done on March 10.