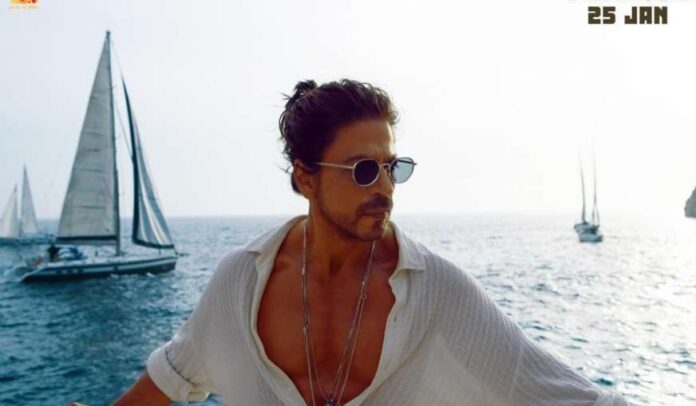 Badshah Khan of Bollywood i.e. Shah Rukh Khan is ready to make a big bang on the big screen once again after 4 years. king khan Very soon he will be seen in the film Pathan. Today he has launched a new poster of the song ‘Besharam Rang’ from the film ‘Pathan’ on his social media. In this poster, he is wearing a white shirt. Shahrukh Khan is looking very sexy while posing. His fans became very excited as soon as this poster was released. The song ‘Besharam Rang’ will be released tomorrow at 11 am.

Shah Rukh Khan has shared the first look of the song ‘Besharam Rang’. In the poster, Shah Rukh Khan is standing on a boat in the middle of the sea. He is wearing a white shirt, his shirt buttons are open and he is flaunting six pack abs in black sunglasses. Also, he has tied his hair. Fans have gone crazy seeing this look of hers. Fans are not tired of praising her look on social media. Sharing this poster, King Khan wrote in the caption, “Boat, beauty and shameless colors.” This song will be released tomorrow at 11 am.

Deepika Padukone’s first look was shared before Shahrukh’s poster in the song ‘Besharam Rang’. In which she was seen in a very hot avatar in a yellow bikini.

Seeing Shahrukh’s look, his fans are very happy. One user commented and wrote that King Khan does not seem to be 57 years old. Another user wrote, Can’t wait to see Shahrukh Khan. So there another user wrote, King is back.

Let us tell you that the pair of Shah Rukh and Deepika has always proved to be a super hit at the box office. The two worked together for the first time in the film ‘Om Shanti Om’ in the year 2007 and in the film ‘Chennai Express’ in the year 2013. Both these films proved to be huge hits at the box office. Let us tell you that apart from Shah Rukh, Deepika, John Abraham is also in the lead role in this film.

Anupamaa: Pakhi becomes more trouble, ruckus is going on in the house on small things