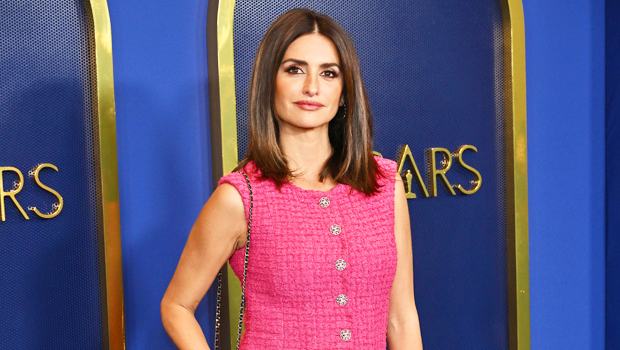 Penelope Cruz stunned in a pink Chanel mini dress fitted with woven material and jewel-studded buttons that went down her entire dress as she celebrated being a nominee for ‘Parallel Mothers.’

Penelope Cruz pulled off another sexy but classy look at the Academy Awards Nominees Luncheon. The 47-year-old actress rocked a sleeveless, pink Chanel dress that was fitted with woven material and jewel-studded buttons that went down her entire dress. The Vanilla Sky actress even had the added bonus of a dress with pockets– a super rare find! She completed the look with a little black purse and matching heels.

Penelope attended the luncheon as a nominee for Best Actress in the 2021 film Parallel Mothers. The competition is pretty stiff in this category as she’s going up against Kristen Stewart for Spencer, Jessica Chastain in The Eyes Of Tammy Faye, Olivia Colman for The Lost Daughter and Nicole Kidman for Being The Ricardos. On top of the talent these actresses have, Jessica already walked away with Best Actress at the SAG Awards.

The American Crime Story actress has spoken extremely highly of her experience working on Parallel Mothers under the direction of Pedro Almódovar. She has admitted that just reading the script for the drama would have her in tears. Even though Pedro may not be able to relate to the journey of motherhood, she ensured that he would take in as much input from his actresses as he could and was able to understand them. “I love that he presents all these different ways of being a mother, and doesn’t judge any of them,” she told Harper’s Bazaar.

Penelope is a mother herself as she shares her kids Leo Encinas Cruz, 11, and Luna Encinas Cruz, 8, with her husband Javier Bardem. She shared how motherhood has affected her while reflecting on filming Parallel Mothers with NPR. “I think it has changed everything in me, the way I see life, the way I feel things, the way I can never think about myself first and the way it affects my work for sure because I leave everything even with more intensity,” she told the outlet.

It has also had a big impact on her acting career. “I used to be working nonstop, like, since I was 17 or 18 until late in my 30s when I became a mother,” she continued. “And I was doing three movies per year, four movies per year, some of them very long, travelling nonstop. But I changed that rhythm when I became a mother because my priority is to be with them and to raise them and to – I just don’t want to miss anything that goes on with them.”