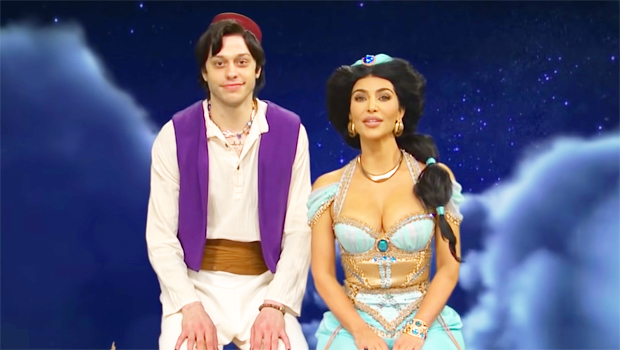 Pete Davidson has been a staple of ‘Saturday Night Live’ since 2014. Check out some of his funniest sketches of all time!

Pete Davidson, 28, has come a long way since making his debut on Saturday Night Live when he was just 20-years-old. The comedian first joined the show in 2014, and he’s only become a bigger star since then. From acting in mainstream movies like The King of Staten Island to making headlines with his celebrity romances, Pete has remained a staple of SNL. While he’ll hopefully be starring in many more sketches for years to come, here are some of his funniest yet in no particular order.

One of Pete’s most memorable sketches of recent memory was when he played Aladdin alongside his now-girlfriend Kim Kardashian in October 2021. The sketch featured the SKIMs founder as the Princess Jasmine, with Aladdin worried about impressing her and eventually using his final wish from Genie to receive more of an “endowment.” While the comedian’s insecure take on the classic Disney character is hilarious, the sketch is probably most famous for his kiss with Kim, before the pair’s romance began, and apparently the sketch was really where the comedian and reality star started to spark their relationship.

Another one of Pete’s most memorable characters is the clueless Chad. One of his best sketches was with his pal John Mulaney, where the Kid Gorgeous comedian played a horror movie killer. While John delivered menacing monologues and tried to strike fear into Chad’s heart, Pete hilariously just went along with everything, giving brief and dopey answers. The sketch culminates with John telling him he’s going to kill him, and Pete simply responds, “No, thank you!”

One of the many times that Pete played his Soundcloud rap superstar character Lil Doo Doo. With cast members like Kenan Thompson and Chris Redd (plus real life hip hop icon Chance The Rapper) playing classic rappers from the late 1970s to Pete’s modern star, the differences between the two should leave any hardcore hip hop fans in stitches, especially when Lil Doo Doo lists the “old school” rappers he grew up on (like Soulja Boy and Nick Cannon). While Pete’s played tons of SoundCloud rappers over the years, putting him alongside the fictional Soul Crush Crew just makes him and his fellow cast members all the more funny.

With Pete joining SNL at a young age, he was primed to play all sorts of younger characters when he first started. One of his obvious early sketches that showed his comedic sensibilities was “Teacher Trial,” where he played a student who was pressing charges against a teacher (played by Cecily Strong) for having a sexual relationship with him. As his lawyer (Taraji P. Henson) questioned him, he flirted with the teacher from the witness stand. He revealed that he became super popular and was living a “dream come true” by having a relationship with his teacher. One of the funniest lines is when the lawyer asks if he’d been bullied because of the affair, and he quickly denied it. “I would describe it as the end of the movie Rudy, and I was Rudy,” he quipped.

In a bit of info-tainment, Pete played a parody of Eminem in a sketch that explained exactly what NFTs are. Set to the tune of “Without Me,” Pete and Chris Redd dropped great rhymes to explain exactly how the blockchain non-fungible tokens work. Of course, this wasn’t the only time that Pete has spoofed Slim Shady. He also dropped a parody of the rapper’s hit “Stan,” to rap about not being able to get a Playstation 5 in a Christmas episode in 2020.

Yet another musical tribute, Pete recruited Big Wet, Method Man, and Marc Cohn for a parody of Marc’s “Walking in Memphis” all about Pete’s hometown of Staten Island, New York. With shots of the ferry and the Fresh Kills garbage dump, Pete celebrated some of SI’s biggest icons like the Wu-Tang Clan and his castmate Colin Jost. He didn’t shy away from playing up some of the borough’s stereotypes with the hilarious lyrics, like “We got a lot of cops and a ton of pills,” he sang. While there are definitely a few shots taken at Staten Island, it is a loving a hilarious ode to the borough.

Speaking of Pete’s hometown, he’s made plenty of jokes at the borough’s expense alongside fellow Staten Islander Colin Jost. One of his funniest roasts of the hometown came when he appeared on “Weekend Update” riff about the island. While Pete’s made plenty of appearances on “Weekend Update” to give hilarious commentary over the years, his juxtaposition against Colin remains one of his funniest. He told the head writer that he “represent[s] what they could be: a kid who got out, [who] went to Harvard, and now, apparently according to People magazine is the world’s sexiest joke writer,” while Pete “represents what they are: a mentally ill community college dropout, who got a Game of Thrones tattoo before watching the show.”

One of Pete’s best qualities is being able to play so well off of the superstar hosts that come through, like when Jennifer Lopez hosted in 2019, and he reprised his role as Chad. While J.Lo tried to flirt with the unwitting Chad, he was clueless to her advances in the funniest way. One of the funniest moments came when J.Lo and Chad were slow-dancing with his fingers covered in Dorito dust, only to be walked in on by her fiancé at the time Alex Rodriguez, who was heartbroken to see the singer with her arms around the silly character.

Pete’s friendship with John Mulaney has served so much comic fodder for the pair, with the standup all-star joking about looking like “Pete’s lawyer,” when they hang out. In an absolutely ridiculous “Weekend Update” appearance, John made a surprise drop-in to talk about the two of them seeing the Clint Eastwood-directed movie The Mule together. When they talk about the strange premise of the movie, Pete chimes in with some commentary to say “the weird part is that [Clint] is 90 and driving.” The two comedians play so well off of each other that it doesn’t matter whether you’ve seen the movie they’re discussing or not.