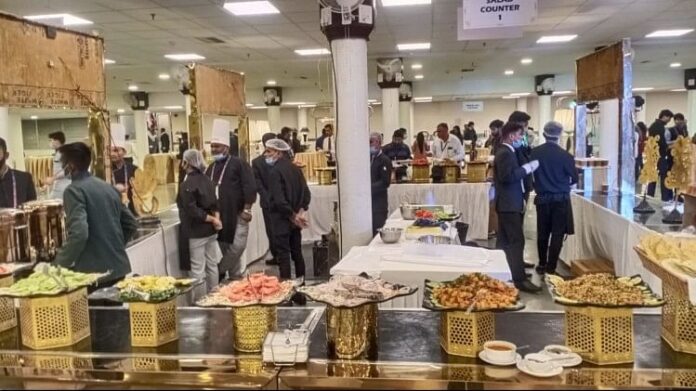 Prime Minister Narendra Modi attended the Pravasi Bharatiya Divas convention organized in Indore today i.e. on 9th January. While addressing the overseas Indians, PM Modi praised the delicious cuisine of Indore, while after finishing the address, he had lunch with about 40 overseas Indians from 70 countries who had come to attend the conference. Many delicious dishes of Malwa were included in PM Modi’s lunch, which he relished. Let us tell you which special dishes were included in PM Modi’s lunch.

Tadka of exotic dishes with Malvi

Foreign dishes were also served in the lunch along with Malvi cuisine. There are different stalls of poha, different types of sev, in which the specialties of Indore have been served. Dishes like Bhutte Ki Kees, Garadu Chaat, Nachni Crackers, Dahi Chandiya were included in the lunch. Apart from Madhya Pradesh, special dishes of Rajasthan and Gujarat are also being served. Bajra Khichda, Sawa’s Sweet Kheer, Saffron Jalebi, Shikanji, Gulabjamun, Sitaphal Rabri, Gajar Ka Halwa were served in sweets.

40 people were included to have lunch with PM Modi at the Pravasi Bharatiya Sammelan. It included internationally renowned Indian industrialists, international politicians and NRIs from India. The participants from Indore told that during the lunch there was emphasis on investment strategies. With this, Modi discussed with the overseas Indians to take Indian culture and tradition to the international level. He also sought suggestions from all NRIs on measures to be taken to make India better at the international level.