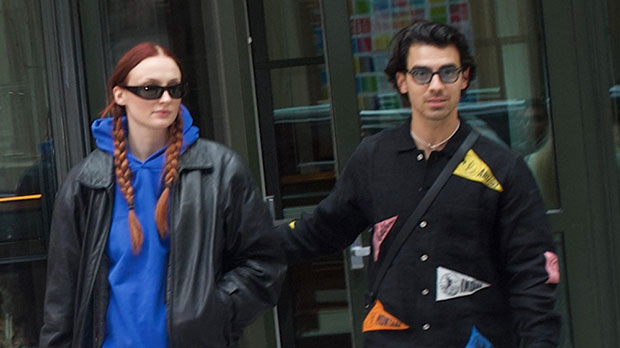 Sophie Turner and her husband Joe Jonas were an adorable duo in their matching color-coordinated outfits while leaving their hotel in the Big Apple.

Sophie Turner, 26, hid her bonus Jonas baby bump well while out on a stroll with husband Joe Jonas, 32, today in New York City! The pregnant Game of Thrones star and Joe — who are expecting their second child together — went the extra mile and dressed to impress by wearing carefully color-coordinated ensembles. Although they were both rocking matching shades of bright blue, judging by their smiles, the two were anything but blue!

In photos obtained by HollywoodLife, Sophie and Joe were spotted leaving their hotel in NYC. Looking very much the star, Sophie was wearing a neon blue hoodie with matching neon blue sweatpants. She paired the sweats with designer boots and a black leather jacket. To give it some extra flair, the young beauty and mother to daughter Willa, 1, threw on a pair of black shades and carried a light pink handbag.

Joe made sure to hold the door and show her some affection by touching her arm as the two exited the building. The musician must have an eye for color too! He wore a black jacket that was adorned with various college flags — one of them matching exactly with Sophie’s sweats. Now that Labor Day is far behind us, Joe complimented his outfit with white pants and white shoes, throwing on a pair of glasses that had a slight tint to them, so that he could easily watch out for his wife and their baby on the way!

As fans know, Sophie has not flat out said that she is pregnant. However, Us Weekly confirmed that the two were having their second child together after the actress stepped out on multiple occasions while wearing an outfit that seemed to show off her growing belly. But now that it is no longer a secret, she went to great lengths to hide the baby bump while stepping out in the Big Apple.