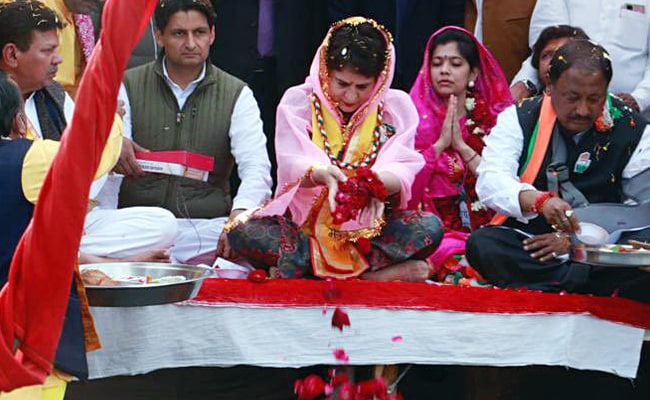 UP polls: Priyanka Gandhi campaigned for Congress in Meerut, Agra and Mathura.

Congress general secretary Priyanka Gandhi Vadra on Tuesday performed a Yamuna puja amid chanting of Vedic mantras at Mathura’s Vishram Ghat, on the day the canvassing for the first phase of the UP assembly polls ended.

She rode a tractor in Meerut’s Mawana while campaigning for party candidate Archana Gautam and took selfies with women, according to a party statement.

Polling will take place for 58 assembly constituencies spread across 11 districts, out of the 403 seats in the state, on Thursday.

While campaigning for her party candidates, Priyanka Gandhi exuded confidence that the hard work of her party will pay off.

The Congress is raising issues of the common people with a roadmap for development, the leader was quoted as saying in the party statement.

I have full faith in the people of UP and the hard work of the Congress will pay off, she said as she urged people to vote for her party.

In Mathura, she took part in a Yamuna puja amidst the chanting of Vedic mantras at Vishram Ghat.

She accused the government of not fulfilling its promise of providing employment to the youth in Uttar Pradesh.

“Five years have passed and yet they failed to provide jobs to unemployed youth,” Priyanka Gandhi said.

A large number of people turned up on the occasion.

Sharing his experience, a party supporter said he never saw such crowd for any political leader in 40 years in Kheragarh.