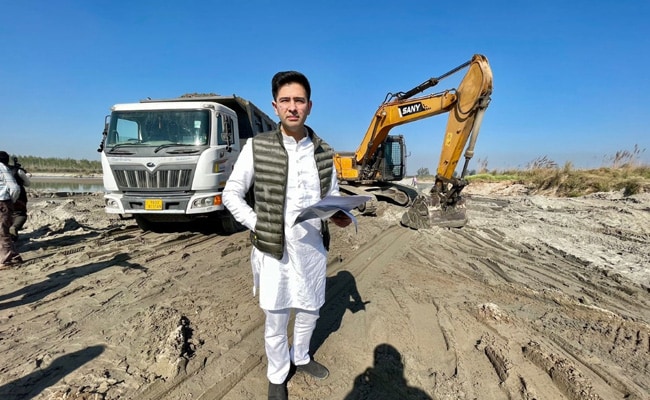 AAP leader Raghav Chadha on Monday said Punjab governor B L Purohit has asked the state police chief to probe into the alleged illegal sand mining racket in the state.

He said Governor Purohit ordered a high-level probe after an Aam Aadmi Party delegation recently submitted a memorandum to him, seeking his intervention for the registration of an FIR in the “multi-layered illegal sand mining racket” in the state.

The governor has ordered the Punjab director general of police to conduct a high-level inquiry in the allegations of illegal sand mining, he said.

In a communication addressed to Punjab DGP V K Bhawra, the governor principal secretary J M Balamurugan, wrote, “I am directed by the Hon’ble Governor to forward a representation dated January 24 submitted by Raghav Chadha of the Aam Aadmi Party, Punjab.” “I am directed to request you to have an investigation done on this matter at the highest level. Action taken on this matter may kindly be intimated to this office,” Mr Balamurugan wrote to the DGP.

This communication was shared by the AAP with the media here.

Mr Chadha, meanwhile, appealed to the DGP and Punjab Police not to come under any kind of political pressure and register an FIR in the matter after conducting a fair and independent investigation into the whole matter.

Mr Chadha said, “We had already exposed the sand mafia in Chamkaur Sahib, the assembly constituency of Chief Minister Channi”.

He said the AAP will be keeping an eye on the investigation by the Punjab Police as it is a very serious matter.

He also targeted Punjab Chief Minister Charanjit Singh Channi over the Enforcement Directorate’s recent seizure of cash amounting to over Rs 10 crore, including about Rs 8 crore from a relative of the CM, during raids conducted by the central agency during a probe into an anti-money laundering case against illegal sand-mining operators in the poll-bound state.

Mr Channi has categorically denied having any link with his relative’s case and accused the political opponents of running a “slanderous and misleading” campaign against him.

“When people of Chamkaur Sahib were seeking answers to the illegal sand mining, Channi ji went to Bhadaur to contest the polls from the second seat. But we want to tell him that our party candidate will win from Chamkaur Sahib and Channi will be defeated by the AAP nominee from Bhadaur as well,” he said.

Mr Chadha said people will not make those victorious from whose relative crores of rupees were seized by the ED.

“If during 111 days of CM’s tenure, crores are seized from one relative, he cannot wash his hands from this. These are the people who looted Punjab and that is why we are seeking one chance from people to bring an honest government to power and strengthen the hands of AAP,” he said.

Replying to a question on Punjab Congress president, Mr Chadha claimed, “Navjot Sidhu’s sole aim is to become the chief minister, he is not concerned about the welfare of people of Punjab.