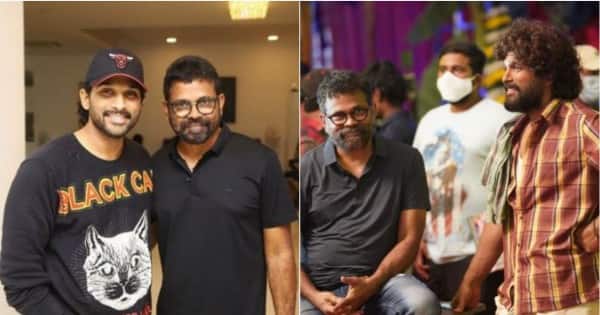 Sukumar’s Pushpa: The Rise – Part 1 starring Allu Arjun and Rashmika Mandanna is a blockbuster at the box office. The film has collected over Rs. 300 crore worldwide (all languages), and the Hindi dubbed version has crossed Rs. 80 crore. Now, fans of Allu Arjun are eagerly waiting for part two of the movie which is titled Pushpa: The Rule. Today, Sukumar celebrates his 52nd birthday, Allu Arjun took to Twitter to wish him. He shared an unseen behind-the-scenes picture from the sets to wish his Pushpa director. Also Read – Pushpa actress Rashmika Mandanna hikes fees, beats Samantha Ruth Prabhu; Check out 5 highest-paid actresses of Tollywood

Many many happy returns of the day to my dearest Sukumar garu ? pic.twitter.com/QNv8lZUaYm

Pushpa: The Rise – Part 1 is Allu Arjun and Sukumar’s third film together. The director-actor duo had earlier worked together in Arya and Arya 2. The first instalment of Arya was Sukumar’s directorial debut. Pushpa: The Rule will be their fourth movie together. Also Read – Trending OTT News Today: Allu Arjun’s Hindi version of Pushpa gets an OTT release date, Karan Johar applauds Minnal Murali actor Tovino Thomas and more

A couple of weeks ago, the makers of Pushpa had organised an event to celebrate the success of the film. At the event, Allu Arjun had stated, “I’m only grateful to only a few people in life. My parents for giving me life, my grandfather for bringing us into the cinema world, Chiranjeevi for supporting me, and Sukumar. After Arya, 5 to 6 later, I bought a car which cost Rs 85 lakhs and when I held the stirring to drive, I thought how did I come so far and the first person who came to mind was Sukumar sir. Without you, I’m nothing, sir.”

While talking to Pinkvilla about Pushpa: The Rule, Sukumar had stated, “We shot two scenes of Pushpa: The Rule, but now, I want to reshoot it. So let’s see, we haven’t shot anything about the sequel. The script is locked and we start shooting from February end. I want to release the movie on December 17 next year.”