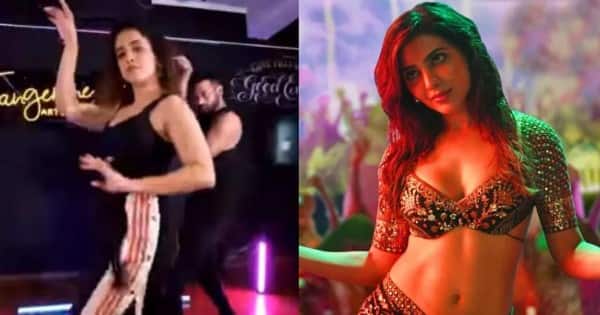 Sam Bahadur actress Sanya Malhotra recently grooved to Samantha Ruth Prabhu‘s song ‘Oo Antava’ from Allu Arjun and Rashmika Mandanna’s film Pushpa. The actress followed the Pushpa trend and took to her social media to share her dance video. On Saturday, the actress shared a video wherein she was seen adding her unique charm to the song. Sanya’s killer dance moves stole the show and we could not take our eyes off her. Sanya donned black track pants with a matching crop top and white sneakers. She shared the video with many dance emojis. Also Read – Pushpa success celebration: Allu Arjun gets the best surprise from his AA team; star overwhelmed with the gesture [VIEW PICS]

Within no time, Sanya’s friends and her fans showered a lot of love on her dance video. Arshad Warsi‘s wife Maria wrote, “Love love love it”. The Family Man actress Priyamani dropped fire emojis in the comments section. Sanya’s co-star Abhimanyu Dassani also commented on the dance video. A few days back, Sanya won hearts with her humility and kind gesture towards a paparazzo who lost his balance and fell on the pavement while shooting her. Sanya rushed to help him and enquiring about his well-being. She was even heard saying ‘sorry’ after another cameraperson tells the actress that this happened as she did not stop for the pictures. Also Read – South News Weekly Rewind: Puneeth Rajkumar’s last movie release date, Ajith’s’s AK61 release date and more

On the work front, Sanya will be seen next in Sam Bahadur with Vicky Kaushal and Fatima Sana Shaikh. She will also be seen in Love Hostel alongside Bobby Deol and Vikrant Massey.