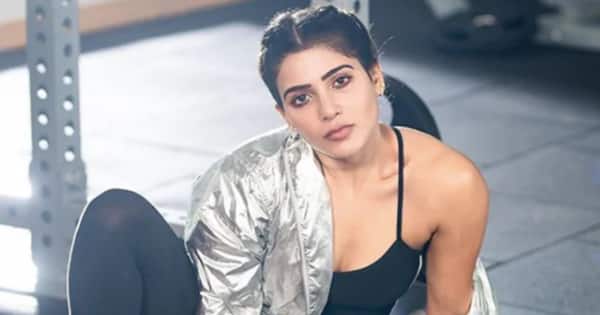 Samantha Ruth Prabhu is among the A-listers of the South Film industry. The actress has come a long way in her acting career and there is no looking back for her. She recently appeared in an item number Oo Antava in Allu Arjun‘s film Pushpa: The Rise. You would be living under a rock if you have not heard about the success of the film and Oo Antava song. Apart from being a popular face, Samantha Ruth Prabhu is also known for being one of the fittest in the industry. She takes her workout routine very seriously and even motivates her fans to do so. But her latest workout session was interupted by someone. Want to know who? Read on. Also Read – Pregnant Kajal Aggarwal SLAMS body-shaming trolls; Samantha Ruth Prabhu comes out in support – view LONG, FIERY post

Samantha Ruth Prabhu took to her Insta stories to share a video from her workout session. As she did her leg raises, two of her pet dogs barged in to give her company. It was a pretty cute scene as the dogs passed from under her legs as she did her workout. Check out the video below: Also Read – Alia Bhatt reveals her family has become Allu Arjun fan after watching Pushpa; they are asking, ‘Aalu when will you work with Allu’

Meanwhile, Samantha Ruth Prabhu hit headlines as she took up the ‘That’s Not My Name’. During the video, she names some of the movies that also had her ex-husband Naga Chaitanya. She named the characters like Jessie (from Ye Maaya Chesave), Bindu (from Naan Ee), Sravani (from Majili), Madhuravani (from Mahanati), Raji (from The Family Man 2), Baby (from Oh! Baby), Ramalakshmi (from Rangasthala), Tara (from Mersal), Mithra (from Theri) and Vaembu (from Super Deluxe) among many others. Also Read – Samantha Ruth Prabhu names movies with estranged husband Naga Chaitanya as she hops on the viral ‘That’s Not My Name’ trend