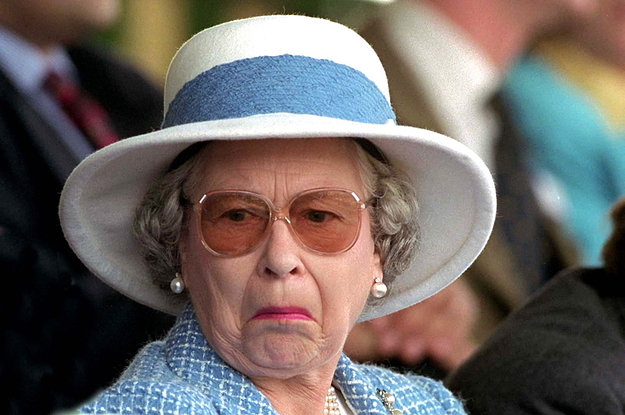 And yet, celebrities like Liz Phair and Paris Hilton (what??) are out here praising her for being the “original girl boss” icon, for not taking shit from men while, let’s say, British soldiers tortured and killed thousands of Kenyans in the ’50s. We’re only just beginning to understand the abuses coming from the British Empire; documents that were thought to be “lost” but resurfaced in 2011 reveal so much barbarity. While she was alive, the Queen never apologized for these crimes done in her name. As the head of the firm, she never even acknowledged England’s grisly history.

I’ve been visiting family in Canada for the last two weeks, perfect timing to be visiting the Commonwealth. My parents are from India; they’re native Kashmiris, a community still reeling from the effects of Partition. My dad was born three years after the British decided to leave, and as such, the Queen hasn’t exactly been held in high esteem by my family. When my dad found out that she died, he barely reacted — if anyone should care, it should perhaps be an Indian Canadian with a Napoleon complex who likes gilded chairs and unyielding allegiance to a cause. Instead, he grumbled how she should posthumously return the Koh-i-Noor diamond to India. “I know she won’t,” he admitted, resigned, while sucking down some falooda. He’s right — apparently, the diamond will go to Camilla, because I guess the royals want my dad to have a heart attack and for my mom to scream at me for a fortnight about why white women don’t even look good in flashy jewelry in the first place.

If you’re sad about the Queen, no matter your nationality, it requires some deep introspection. What are you sad about? What do you feel like we lost? A piece of history already so thoroughly documented? A reminder of what imperialism looked like back when whiteness, wealth, and European domination were even more pronounced than it currently is? Is it nostalgia for a time when things were easier — for you? The monarchy is defunct, its members are institutionally powerless, and now the Queen is dead. The world is moving on past what the monarchy gave us or, rather, what the monarchy took. Diana’s gone, Meghan’s making podcasts in Palo Alto, and you want me to feel sad that the Queen died? Pass. Save your tears for something that matters. ●