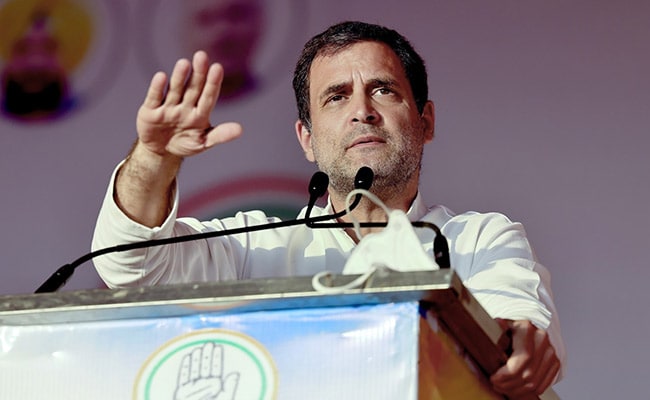 Rahul Gandhi had pleaded not guilty during his appearance before the Surat court last year. (File)

The Gujarat High Court has issued a notice to Rahul Gandhi on a plea by state BJP minister Purnesh Modi challenging a Surat court order rejecting his application filed in connection with a criminal defamation case against the Congress leader over his 2019 “Modi surname” remarks.

The complainant recently approached the High Court challenging the February 23 order of the Surat court rejecting the minister’s application to make the accused (Mr Gandhi) “personally explain contents of the CDs and/or pen drives and/or such other electronic records” related to his speech.

The High Court also granted an interim stay on proceedings in the private criminal defamation case pending before the Surat court as prayed by the complainant.

The BJP minister (then a legislator) had filed a criminal defamation case against Mr Gandhi over his remarks on “Modi surname” made while addressing a Lok Sabha election rally at Kolar in Karnataka in 2019.

The complainant said the Congress MP’s alleged remarks, “how come all the thieves have Modi as the common surname?” defamed the entire Modi community.

Mr Gandhi had pleaded not guilty during his appearance before the Surat court last year.

The court had also recorded the former Congress president’s statement in the case filed by the BJP leader in April 2019 under Indian Penal Code (IPC) sections 499 and 500 (dealing with defamation).

During the trial, the complainant had submitted certified copies of three CDs received from the district election officer and collector of Kolar which contained his observation about the “Modi” surname.

Complainant Purnesh Modi wanted the Surat court to play the CDs in the presence of Mr Gandhi to enable him to personally explain their contents as per the provisions of section 313 of the CrPC (related to power to examine an accused) so as to avoid any technical objection in the future, a request rejected by the court.

The magistrate’s court had also rejected the minister’s plea for time to challenge the order in the High Court.

In the hearing before the High Court on March 7, Purnesh Modi’s lawyer Harshil Tolia relied upon a Supreme Court judgment on proper methodology to be adopted by the court while recording the statement of an accused under section 313 of the CrPC.

During the rally at Kolar, Mr Gandhi had allegedly said, “Nirav Modi, Lalit Modi, Narendra Modi…how come they all have Modi as common surname?”