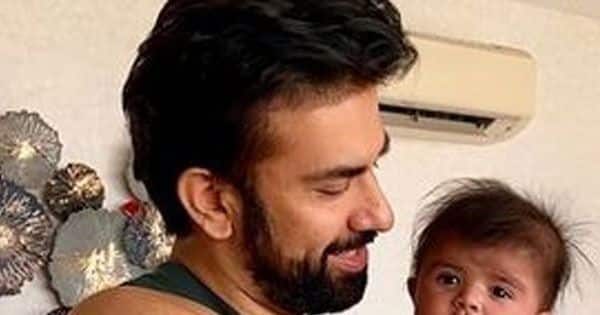 Charu Asopa and Rajeev Sen’s marriage had come under the scanner once again after Charu had been posting solo pics from Bikaner. She was there for her birthday. Fans began wondering what went wrong in their marriage. Rajeev Sen, on his YouTube channel wrote about how much he has been missing his baby girl, Ziana. She was born in November. The couple recently moved into a new home in Goregaon. In fact, Rajeev Sen’s parents were present for the delivery and homecoming of the baby girl. Sushmita Sen was also there. Fans started to wonder what went so wrong in their marriage. Also Read – Charu Asopa REACTS to separation rumours with Sushmita Sen’s brother Rajeev Sen

Yesterday, Rajeev Sen posted adorable clicks with daughter Ziana. This made fans’ hearts happy. A fan commented, “Beautiful!!!!So happy to see this,” while another one wrote, “Feels so good to see this and know that she’s back.” Also Read – Trouble in Charu Asopa and Rajeev Sen’s paradise? Sushmita Sen’s brother says he hasn’t seen his daughter Ziana for a long time

Charu Asopa and Rajeev Sen’s marriage had run into trouble six months after they tied the knot. He had left their Mumbai home. Charu Asopa said that she was unsure of when he would come back. She said that they were having issues and there was no certain dialogue on the same. Also Read – Trending TV News Today: Aditya Narayan-Shweta blessed with a baby girl, Parineeti Chopra trolled for crying on Hunarbaaz and more

During their split, Charu Asopa told The Times Of India, “What will happen in future I am waiting for God to show me the path, I have left everything on him now. I think problems happen in everyone’s life, and we all go through ups and downs, it’s just that we are celebrities, so a lot is written about us. if there is a light at the end of the tunnel, I will surely see. And when I get to see it I will share it with everyone.” But they reconciled and even posted lovey-dovey pics from a trip to Thailand.