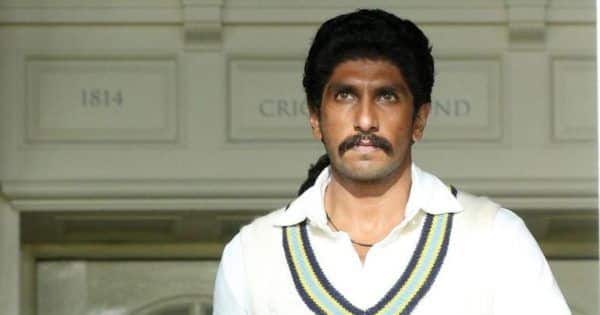 Ranveer Singh and the team of 83 have a reason to celebrate as the film crossed the Rs 100 crore mark at the box office. According to reports, the film collected Rs 1.50 crore nett more on Sunday. It’s overall collections now stand at Rs 100.85 crore nett. Ranveer played Kapil Dev in the film. On the cricketer’s birthday recently, Ranveer wished the legendary cricketer on his birthday. The actor took to his Instagram and posted the picture with the man whom he portrayed on the big screen. He wrote in the caption, “Happy birthday to the original Sakht Jaan @therealkapildev what an honour it’s been embodying your champion spirit on screen!” Have a look at the post below: Also Read – Trending ENT news today: Hrithik Roshan’s Krrish 4, Sushmita Sen’s ex Rohman’s comment on her video, Kabir Khan’s dig at Salman Khan and more

The picture is from the film’s making and bears an uncanny resemblance between the actor and the captain of the 1983 World Cup-winning squad. Ranveer’s co-actor in the film Jatin Sarna, who played Yashpal Sharma in ’83’, commented under the picture, “Dono ka jawaab nahi.” Also Read – Cirkus: Ranveer Singh opens up on the RELEASE of the Rohit Shetty movie and how it’s similar to Golmaal [EXCLUSIVE VIDEO]

Ranveer considers it his duty to use his craft for entertaining people and telling stories in the most engaging way. The actor is glad that the profession of acting allows him to explore the human being in him as well. Says the actor, “I am really just in the process of exploring myself as a person. To do different characters and present different films that we as people can be proud of, I feel duty-bound to entertain people.” Also Read – Alia Bhatt, Anushka Sharma and more: 5 Bollywood divas who are lucky to have awesome photographer partners

Reflecting up on his journey, he says, “It’s been an amazing 10 years. I have worked with the finest filmmakers who have shaped me, taught me what it means to be an artiste. I have learnt so much but I feel hungry. My hunger is insatiable, I want to do more films like ’83’ that receive this kind of unanimous love.”