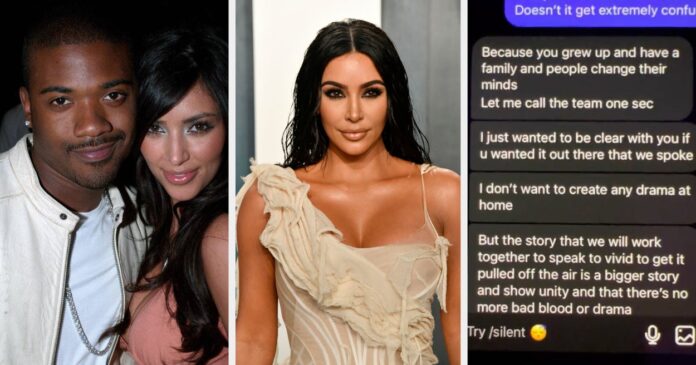 The test was administered by polygraph expert John Grogan, who determined that Kris was telling the truth during the segment.

But now, Ray J is maintaining that Kris was the “mastermind” behind the tape and has called out the manager — and John — in a scathing series of posts. “We did it,” Ray J said in a 20-minute video on Instagram.

Ray J even claimed that there were multiple different sex tapes — and Kris picked the one that was released because it was “better” and gave Kim a “better look than the second one.”

“You watched it, and made a decision,” Ray J said. “Then, you get on whatever show and take a lie detector test with a fraud.” The singer went on to claim that John doesn’t have a license and uses “someone else’s.”

In a separate Insta, Ray J posted negative articles and videos about John and wrote, “John Grogan is a fake. He is not a polygraph examiner. He is quite accurately known as the polygraph parasite.”

“I was just gonna handle this shit legally, right, and just hit you in court and just get what I’m deserved from all of y’all being foul and trying to defame me, trying to make me look bad, when YOU know what’s up.”

Ray J’s main takeaway is that he’s done being villainized by the sex tape storyline. He said romantic partners don’t trust him because of his reputation following the leaked sex tape with Kim. He also said he had to defend himself to the board of his own company, Raycon, following the recent episode of The Kardashians where the tape was discussed.

THEN — yes there’s more — Ray J shared old texts between him and Kanye, where the two discuss the tape and the “contracts” between him and the Kardashians following the tape’s release. Ray J alleges that Kim and Kris signed his name for him, and that Kanye was trying to get any remaining sex tapes back, along with this faulty contract.

Ray J then told Kanye via text that Kris “brokered” the deal.

Then Kanye started sending him models and fashion pics, which was random and confusing for Ray.

Then, Ray J revealed his DMs with Kim during the time when the sex tape was a storyline in the new Hulu series in April 2021. In a separate 48-minute-long video, he shows viewers that it’s Kim’s verified account and reveals the messages where he called out Kim. “You know what we did,” Ray J wrote in multiple all-caps messages.

Kim responded, explaining the situation and how the following episodes depict the now-infamous moment where Kanye returns the computer with the alleged remaining tape.

After Ray J then sent multiple messages, Kim said she spoke with her team and would make a statement that clarified Ray J had no plan to release any of their additional footage 20 years later:

Kim said she wanted no drama with Ray J and to move on from the tape. Ray J told viewers he’s still being villainized on the show.

It looks like the two actually left off on good terms. This is the last DM we saw in the video. I guess it was Kris’ recent lie detector segment that triggered Ray J to share all these messages and information.

SO…TL;DR Kris Jenner went on James Corden’s show and claimed she had nothing to do with releasing the sex tape, which was deemed “true” by a polygraph expert, who Ray J says is fake. Ray J said Kris did, in fact, orchestrate the whole thing. Ray J said he never planned to release the tape and showed DMs and messages with him and Kim and Kanye because he’s tired of being villainized on the show and in media.

That’s the bulk of it. However, there is A LOT in these videos. You can watch the full video here, and the second video here.

Keep up with the latest daily buzz with the BuzzFeed Daily newsletter!