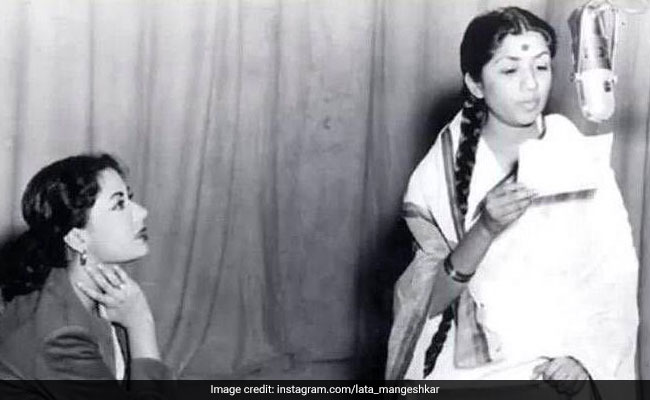 Lata Mangeshkar was popularly known as the ‘Nightingale of India.’

Renowned playback singer Lata Mangeshkar died today at Mumbai’s Breach Candy Hospital. She was 92. A legend of Indian cinema, Lata Mangeshkar recorded songs in over a thousand Hindi films in a career that spanned more than seven decades. She was hospitalised in early January after testing positive for Covid-19. Lata Mangeshkar was born on September 28, 1929, to Pandit Deenanath Mangeshkar and his wife Shevanti. The eldest of five siblings, she captured the nation’s imagination with her melodious voice in the 1940s, and her fame only grew with time.

As tributes pour in for the ‘Nightingale of India’, here is a look at 10 black and white pictures from Lata Mangeshkar’s Instagram.

Lata Mangeshkar’s father was a respected Natya Sangeet musician and Hindustani classical vocalist. She was introduced to music at an early age and she followed in his footsteps. In 1938, she performed “shastriya sangeet” and “natyageet” with her father for the first time.

Ms Mangeshkar lost her father in 1942, when she was just 13. A family friend helped Lata Mangeshkar at the start of her career. She recorded her first Hindi song in the year 1943.

Lata Mangeshkar’s breakthrough came with Dil Mera Toda, Mujhe Kahin Ka Na Chhoda in 1948. In the years that followed, her fame grew by leaps and bounds as she delivered some of Hindi cinema’s most memorable hits. In her remarkable career, Lata Mangeshkar worked with some of the greatest legends of cinema.

She was close to Dilip Kumar and after his death last year, Lata Mangeshkar shared a post for him. “Yusuf Bhai left his younger sister today,” she wrote. “an era has ended. I don’t understand anything. I am very sad,” she wrote.

Singer Bappi Lahiri credits Lata Mangeshkar for his success. “I was 4 when in the Eden Garden locality of Kolkata where we lived, Lataji came home and blessed me. I still have a picture of me sitting in her lap,” he told Times of India.

She was a dog lover too, and encouraged people to show compassion towards animals.

Lata Mangeshkar met some illustrious personalities during her years in the industry. These included Pandit Jawaharlal Nehru, Indira Gandhi and Bal Thackeray.

An icon of Indian cinema, Lata Mangeshkar spent her last years at Prabhukunj building at Peddar Road, Mumbai. After her hospitalisation on January 8, she was treated for both pneumonia and COVID-19. Ms Mangeshkar health deteriorated on Saturday, after which she was put back on the ventilator, news agency ANI reported.