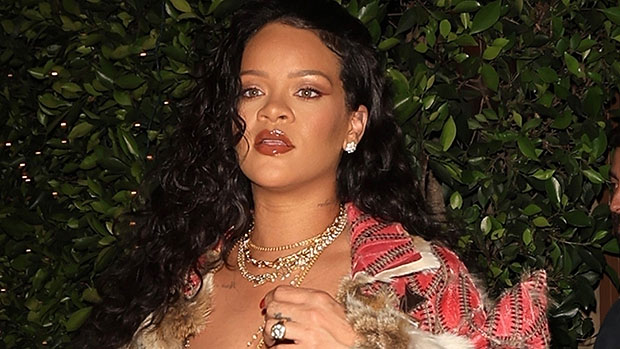 Rihanna is still wearing that huge diamond on her ring finger after she was first spotted with the bling on Monday, leading fans to wonder if she and A$AP Rocky are engaged.

Rihanna isn’t shying away from flashing her bling! The pop star teased a huge diamond ring on that finger yet again. It seems like RiRi is even having fun with all the speculation as she stepped out for a night on Tuesday, March 22. As she strutted down the street in a long floral coat and swirling chrome print bodycon dress, onlookers asked her about the rock. “This old ring?” She quipped humorously. Take a look at a video of the amusing exchange here.

This isn’t the first time the “Pon De Replay” singer was spotted with her huge circular diamond ring. Speculation about hers and A$AP Rocky’s engagement began when she first flashed the ring on Monday, March 21 while shopping for baby clothes at Kitson. While she kept it casual with a graphic T-shirt and low-rise jeans, there was nothing casual about her big ring.

It wouldn’t be too surprising if Rocky had popped the question to the “SOS” singer. A source close to Rihanna revealed that she knew a proposal was on the horizon back in January. “Rocky has a great relationship with Rihanna’s family and it’s only a matter of time before he proposes,” our source divulged.

“Rocky absolutely feels that Rihanna is the perfect person for him, and he can’t imagine his life without her. They have discussed marriage and kids. They know it’s something they both want,” they continued. Well, we now know that a little one is on the way so it wouldn’t be surprising if a proposal and eventual wedding came along with it!

Speaking of her pregnancy, it seems the Fenty founder is due any day now as she opened up about being in her third trimester. While she hasn’t spoken out about the baby’s sex, it seems she dropped a major hint in the same way that she has about her potential engagement. She was recently spotted shopping for baby clothes in Target and after placing an orange ruffled dress in her shopping cart, many have suspected that she plans on having a baby girl. Of course, it’s not impossible that she’s just messing with us in both instances. For now, we’ll be keeping an eye on that ring finger.