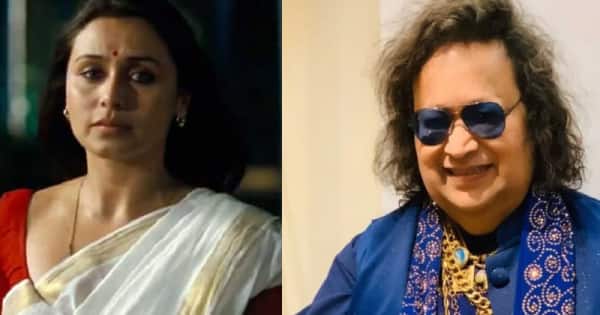 Legendary singer and composer Bappi Lahiri’s sudden demise has left everyone numb. Fondly known as Bappida, he breathed his last at the age of 69. Reportedly, he was hospitalised for a month before he returned home. However, on February 15, his health deteriorated again and was hospitalised again. Soon after the news of demise made it to the headlines, tributes and condolences started pouring in from all corners. Rani Mukerji also mourned his death and called it a personal loss. She revealed that Bappi Lahiri and her mother were childhood friends from Calcutta. The actress said that her mother is devasted. Also Read – Legendary singer Bappi Lahiri passes away at 69, Remembering him through these lesser known facts, RIP Bappi Da!

To Times of India, Rani Mukerjee was quoted saying that country has lost a precious gem with Bappi Lahiri’s demise. She said, “India has again lost one of her precious gems. Bappi uncle is and will always be the most iconic musical personality of Indian cinema. His music was legendary. His versatility as a composer was unmatched. He was truly a self-made man, a great son to his parents, a wonderful husband and a great dad. My Mum and Bappi uncle were childhood friends from Calcutta. It’s a personal loss for our family and my mother is devastated.” Also Read – RIP Bappi Lahiri: When Disco King alleged international stars like Eminem, Akon, Shakira and others copy his style

Post his demise, an official statement was released by his family. It read, “It’s a deeply sad moment for us. Our beloved Bappi Da has left for heavenly abode last midnight. The cremation will take on the arrival of Bappa From LA tomorrow mid-morning. We are seeking love and blessings for his soul. We will keep you updated.” His funeral will reportedly take place tomorrow as his son Bappa arrives from LA. Also Read – RIP Bappi Lahiri: Singer Abhijeet Bhattacharya pays heartfelt tribute to Bappida’s legacy; says, ‘His music turned even 60-70+ into youngsters’ [EXCLUSIVE]