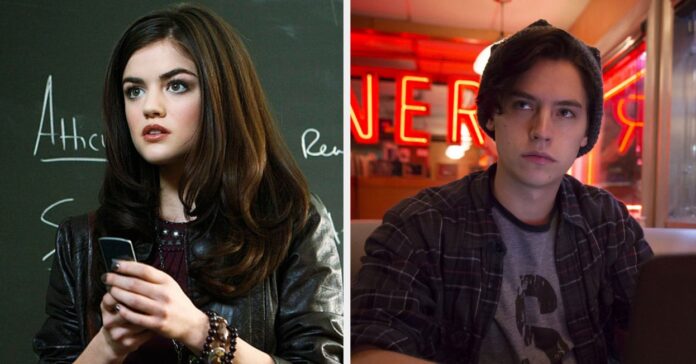 Unless you’ve somehow been living under a rock the last few years, I’m assuming you’ve heard of a little show called Riverdale.

And you’ve also heard of Pretty Little Liars, right? The OG teen drama series ran from 2010 to 2017. It took place in a town called Rosewood, where every single awful thing imaginable seemed to happen.

In a new episode of Original Sin, Tabby and Imogen take a field trip to Rosewood. They visit a hotel called the Radley, which used to be known as Radley Sanitarium. Several of the OG Pretty Little Liars characters stayed there, including Spencer and Mona.

Then, the hotel’s maintenance manager, Eddie Lamb, tells them that the mother of Angela Waters (Angela is a deceased girl from the past that the Imogen and Tabby are trying to get more information on) was a patient at Radley for years.

Sooo, what exactly does this have to do with Riverdale, you ask? WELL, Eddie’s next words change everything:

If you watched the early seasons of Riverdale, you’ll remember that Cheryl’s mother once sent her to the Sisters of Quiet Mercy for anti-gay conversion therapy. Polly, Betty, and Ethel also stayed there at different points.

Executive producer Roberto Aguirre-Sacasa, who’s also the creator of Riverdale, confirmed that this means Pretty Little Liars and Riverdale take place in the same universe. “We kind of just wrote that line in,” he said in an interview with TVLine. “I assumed that we wouldn’t be allowed to reference Riverdale, since it’s in a completely different universe, but it stayed in. So, yeah, I guess it does exist in the same universe.”

That alone is quite a revelation, right? But things get even wilder from here. In this same episode, Tabby references Cole Sprouse…who, as you know, plays Jughead in Riverdale.

And the chaos doesn’t stop there. Remember the 2020 Riverdale spinoff Katy Keene? It aired for one season and starred Lucy Hale as the titular character.