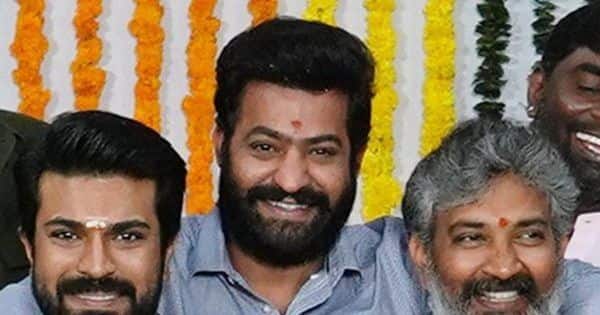 SS Rajamouli’s upcoming magnum opus RRR is just a week away from its theatrical release and it seems like Jr NTR and Ram Charan are in for a surprise for their fans. The two powerhouse actors, who admit that they have missed watching their own movies on the first day along with their fans, have heeded the advice of the film’s helmer SS Rajamouli’s son Karthikeya, who is an important member of the RRR production team. Also Read – RRR: Ram Charan gets plastered all across Times Square, New York; fans go bonkers – watch video

Karthikeya has reportedly come up with a fun plan for the duo to watch the movie along with their fans. He has advised Jr NTR and Ram Charan to wear prosthetic makeup and appear in disguise so that no one identifies them during the first-day-first-show of RRR. Though the casual conversation seems to be a fun part of the extended promotion of the much-awaited film, the actors are yet to decide on the idea. Also Read – Ajith Kumar’s AK62, Allu Arjun’s film with SS Rajamouli and more South movies for which fans are eagerly awaiting official announcements

Meanwhile, Jr NTR and Ram Charan admitted that they were upset by SS Rajamouli’s lack of empathy while on the sets. “Rajamouli does not show any empathy while on the sets. Even if Charan or I had small issues, he would make us join the shoot, and complete the task,” NTR complained. In response, Rajamouli said, “I have to control myself not to show empathy. If I start showing empathy and stop the show even for one day, it will cause a huge damage to the production house.” Also Read – RRR: Makers of Ram Charan, Jr NTR, Alia Bhatt, Ajay Devgn starrer plan a grand promotional tour – Read Deets

Ram Charan, on his part, admitted that there was a time when he got irked by Rajamouli’s behaviour. “I was not feeling well and Rajamouli still wanted me to come down and start shooting. He said that a thousand people have come down to work on the sets, so it will be a waste of money if I didn’t show up,” Ram Charan recalled.

RRR is set for release on March 25.