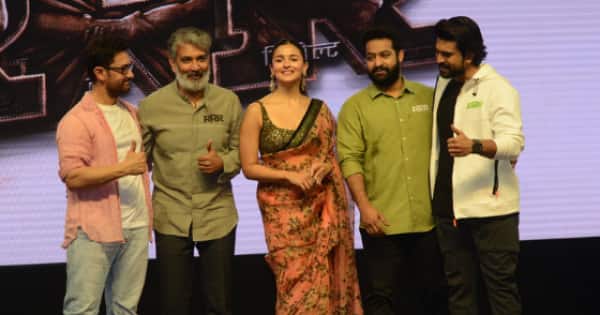 Aamir Khan joined promotions of SS Rajamouli’s film RRR starring Ram Charan, Alia Bhatt, Jr NTR to name a few. The action-drama film is all set to release in the cinema halls in a couple of days now. RRR promotions are happening all across the country. And recently, the cast and crew of the film jetted off to Delhi to promote their film. And Aamir had joined them for the same. And that’s not it, he also happened to do the Naatu Naatu step with Ram Charan and Jr NTR. Also Read – The Kashmir Files: Aamir Khan comes out in support of Vivek Agnihotri’s film; says, ‘har Hindustani ko dekhna…’

Ram Charan and Jr NTR tried teaching Aamir Khan the hook step of Naatu Naatu. Aamir at first, seeing how complete the footwork is, said, “Mujhse nahi hoga. (I cannot do this).” However, Alia Bhatt encouraged him saying, “It’s very easy,” while cheering on him. The masses who had joined the celebs for the promotional event went crazy on seeing all the pan-India stars in one frame. Check out the video here: Also Read – Trending South News Today: Aamir Khan promotes RRR in Delhi, Telugu actress Gayathri passes away in car accident and more

Meanwhile, recently, reports on the budget of RRR had surfaced. Andhra Pradesh Minister Perni Nani told Indian Express that they had got an application from the makers of RRR. And as per the information given in the application, the budget of the film was said to be Rs 336 crores. And this budget does not include the salaries of the cast and crew. Also Read – RRR: Jr. NTR and Ram Charan keep it casual while Alia Bhatt charms in a beautiful saree as they promote the film in Delhi – view pics

Another report surfaced which revealed the run time of RRR which also stars Ajay Devgn in a cameo appearance. The run time of RRR’s Hindi version is said to be is 3 hours, 6 minutes, 54 seconds long. Apart from the aforementioned cast, RRR also stars Olivia Morris, Samuthirakani, Alison Doody, Ray Stevenson to name a few. The film is produced by DVV Danayya under the banner of DVV Entertainments. It is also bankrolled by Pen Studios, Lyca Productions KVN Productions, Thameens Films.