The Russian App Store has lost 6,982 mobile apps since the start of the Ukraine invasion, as numerous companies have now pulled their apps and games from Apple’s iPhone and iPad App Stores in the country, according to data shared with TechCrunch by app intelligence firm Sensor Tower.

To date, those apps had been downloaded around 218 million times in Russia, representing a little over 3% of their total 6.6 billion global lifetime installs. Amid the widespread exits, several Big Tech companies’ apps continue to rank highly on the Russian App Store, though the Top Charts currently are filled with VPN apps.

While Apple routinely removes outdated and abandoned apps from its App Store, the Russian App Store app removals post-invasion (February 24 through March 14) represent a 105% increase in the number of apps removed from the store when compared with the first two weeks of February 2022 (February 1 to 14). During that earlier period, Russia’s App Store had seen only 3,404 app removals — a figure that was in line with the number of apps pulled from Apple’s App Stores in other markets, including the U.S., where 3,422 apps were removed. These pre-invasion app removals were likely related to Apple’s ongoing cleanup efforts, Sensor Tower noted.

Russia is not the only country being impacted in this way. Many publishers also removed their apps and games from the App Store in Belarus, Russia’s neighbor and ally. That country has now seen a loss of 5,900 apps since the invasion’s start — a figure that increased by 73% when compared with the 3,418 apps removed from February 1-14.

As a result of Russia’s decision to wage war against Ukraine, the country has been cut off from the global economy as the U.S. and its allies coordinated to enact broad economic sanctions. Large companies have also stopped doing business in Russia, including some of the world’s best-known brands, like McDonald’s, Apple, Microsoft, Disney, IKEA, H&M, Adidas and Starbucks, as well as payments giants Visa, Mastercard and Amex, among others.

In some cases, the Russian App Store removals are related to those big brand exits. For instance, Coca-Cola pulled its iOS loyalty and rewards-focused app out of the Russian App Store, as the company recently vowed to suspend its business in Russia. Retailers like H&M and American Eagle Outfitters also pulled apps, along with Ebates’ shopping platform ShopStyle.

In sports, apps from the NFL, NBA, WWE and Eurosport have disappeared from the Russian App Store following the invasion. Also gone are health apps from MyFitnessPal, Kaiser Permanente, and numerous smaller fitness, meditation and yoga apps. Of these, MyFitnessPal had been fairly popular in Russia, having seen some 4.2 million installs to date, including those across both iOS and Android.

Games are the largest category seeing removals in Russia and represent some huge departures. The Russian App Store has lost a number of top games from publishers including Zynga, Supercell, Take-Two (Rockstar Games), and others — many of which have publicly announced their exits.

In response to the ongoing war in Ukraine, Supercell has removed its games from app stores in Russia and Belarus. New downloads are halted and access for existing players will be suspended with the next client updates.

For instance, Supercell on March 9 tweeted that, in response to the ongoing war, “new downloads are halted and access for existing players will be suspended“ with the next update. The company’s games that were pulled from the App Store in Russia included Brawl Stars, Clash of Clans, Clash Royale and Hay Day. These are sizable exits — Clash of Clans alone has seen 36 million installs across both iOS and Android to date in Russia, for example.

Rockstar Games pulled over a half dozen titles from its Grand Theft Auto series, among others. Its parent company, Take-Two, had announced its intentions to exit Russia on March 7, noting it had watched the events unfolding in Ukraine with “concern and sadness.” It said it would stop new sales, installations, and marketing in both Russia and Belarus.

Zynga, meanwhile, said on March 8 it’s been watching the events in Ukraine with “great concern” and would exit Russia and Belarus as well as donate to relief organizations. The publisher has now pulled dozens of its casual games from those countries’ App Stores, including many bigger titles like Farmville 3, Harry Potter: Puzzles & Spells, Empires & Puzzles, Solitaire, Zynga Poker, and others from its 2020 acquisition, Rollic Games.

Netflix has also delivered on its promise to leave Russia with the removal of its streaming app in the country. Dating apps Bumble and Badoo are gone, too. Bumble (Badoo’s parent) said during its Q4 2021 earnings on March 8 that it would leave both app stores in Russia and Belarus. The combined revenue it saw from Russia, Ukraine and Belarus was approximately 2.8% of total Bumble annual revenue in 2021, the company added.

Other notable removals from the Russian App Store include Amazon’s IMDb, travel app Trivago, The Weather Channel (IBM), Playtika and Big Fish Games (games), Hily’s dating app, Citizen, DAZN sports live streaming, AllTrails, and Google Home. (AllTrails had not yet released a public statement, but told TechCrunch it has now “indefinitely suspended” services in Russia. “We stand with the people of Ukraine, and refuse to associate with Russia as they wage this tragic war,” the company said.)

In terms of removal by categories, the types of apps that have seen the largest number of removals from the Russian App Store include those in Games, Productivity, Utilities, Music, Business, Education and Health. As a point of reference, more than 860 games were removed across impacted App Stores, including those in Russia, Belarus and, to some extent, Ukraine. (Only a handful were pulled in the latter, however.)

However, not all tech giants have fully exited Russia’s App Store at this time.

Microsoft on March 4 announced it was halting all new sales of products and services in Russia and has since pulled apps like Solitaire, Majong, Wordament and, notably, Minecraft from the Russian App Store. But still ranking at the top of the Productivity charts in Russia are Microsoft’s Word, Office, Excel, Powerpoint, Teams and Outlook, per Sensor Tower data. 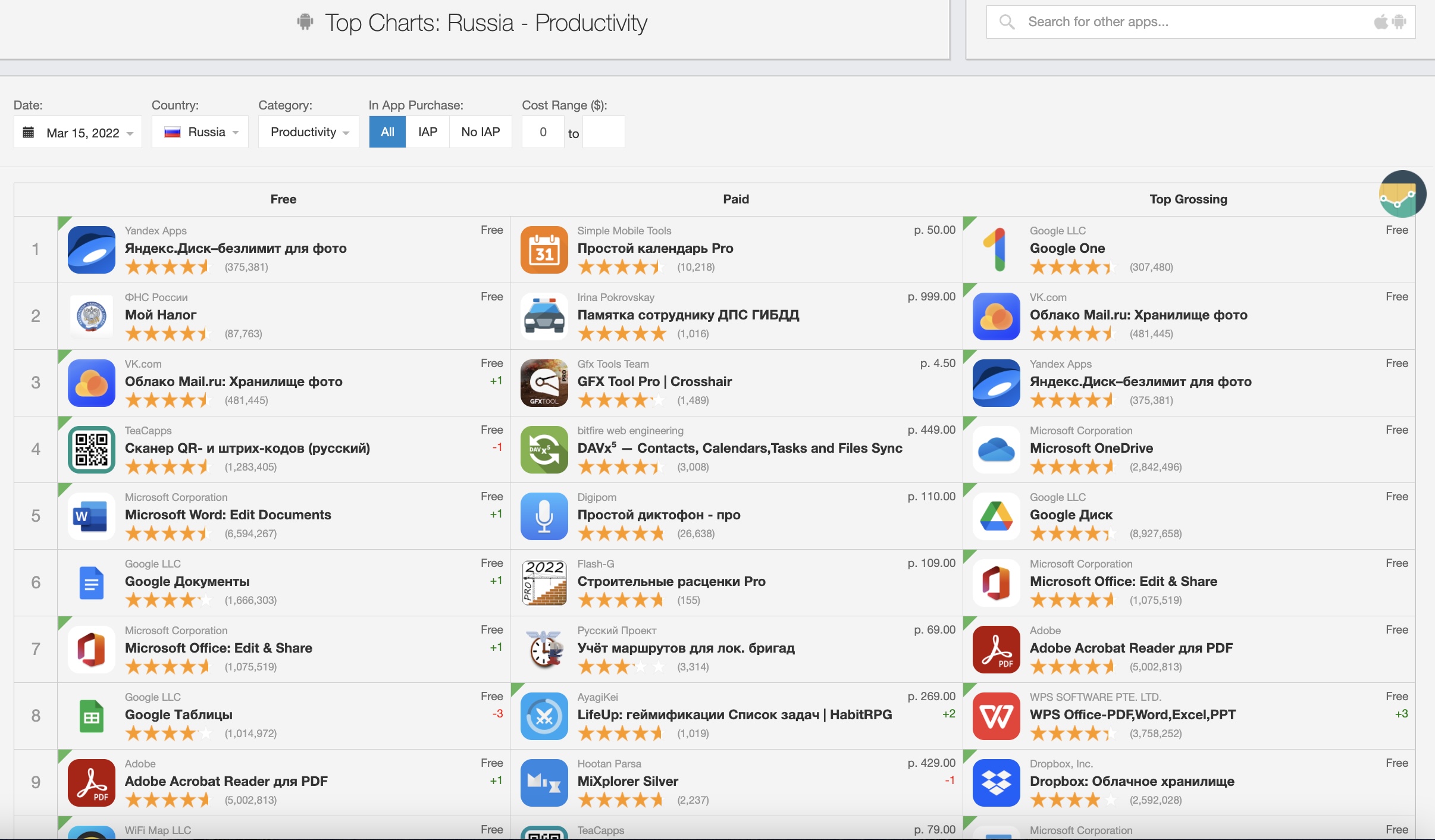 Microsoft is not alone. Google took several actions against Russia, including the suspension of its advertising business in the country, but its productivity apps are still available in Russia. Currently ranking highly on the Top Productivity apps chart are Google’s Docs, Sheets, Slides, Assistant, Calendar, Drive, One and Keep, for instance.

Adobe, too, committed to leaving Russia, saying on March 4 it would “halt all new sales” of Adobe products and services in Russia, “effective immediately.” It also said it would terminate access to Adobe Creative Cloud, Adobe Document Cloud and Adobe Experience Cloud for all Russian state media outlets and pledged money toward the refugee and humanitarian aid.

In the days since, Adobe has pulled some of its apps from the Russian App Store, like Photoshop and Illustrator, but others remain available for download, as of the time of writing, including a top-ranked Business app, Adobe Reader. Its iOS app is currently at No. 15 in the top Business apps chart.

Microsoft, Google and Adobe did not yet respond to requests for comment.

At present, Russia’s Top Chart for its overall App Store is pointing to apps that no longer work or where content is heavily restricted.

On Monday, Instagram was blocked in Russia, impacting 80 million users. But the app still ranks at No. 34 overall in the country today, as it wasn’t actually removed from the App Store. (That means users can still download the app, but can’t access the service, except, perhaps, via a VPN). Russia has also restricted other social media, including Facebook and Twitter, while TikTok suspended users’ ability to livestream and post new content in Russia and has blocked all non-Russian content.

But TikTok is still ranking well, as the No. 18 overall app on Russia’s App Store, followed by YouTube at No. 27. YouTube, like other platforms, has banned Russian state media outlets and paused advertising and payments.

The downranking of these social apps can only partly be attributed to the bans and restrictions. Another factor is the VPN apps, which now dominate the Top Charts. 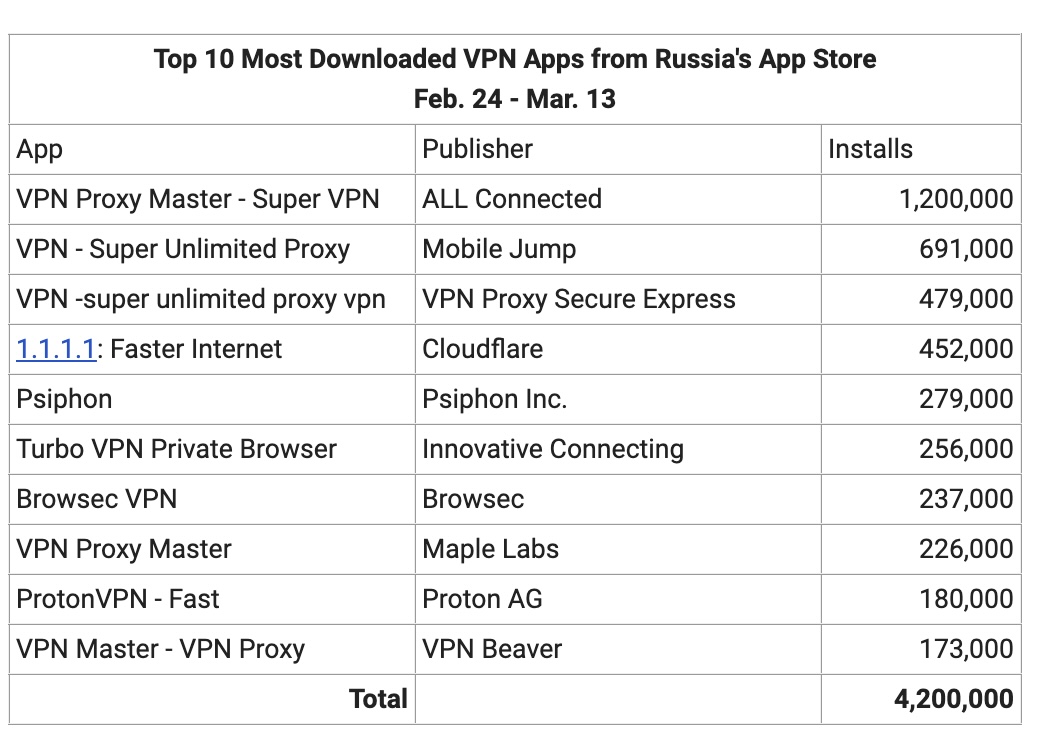 The top 10 VPN apps collectively reached 4.2 million installs from February 24 through March 13, up 2,286% from the prior period, when the top 10 apps hit about 176,000 installs, Sensor Tower data indicated. The firm noted it also saw apps like Cloudflare’s 1.1.1.1 and Psiphon appear in the Top 10, though the app dubbed 1.1.1.1 isn’t only a VPN; it advertises privacy and security, which likely appeal to Russian users at this time.