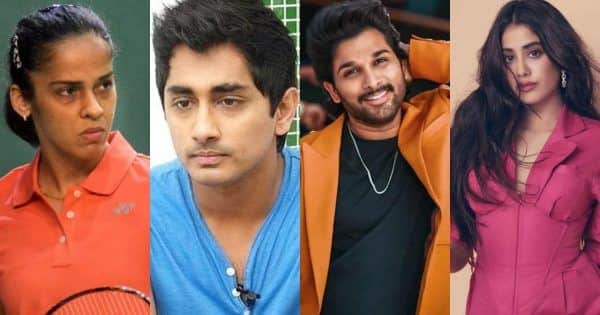 It’s been another eventful and exciting day in the world of entertainment and we are here to bring you a wrap of all the trending south news of the day. From Saina Nehwal breaking her silence on Siddharth’s controversial tweet to Janhvi Kapoor calling Pushpa actor Allu Arjun ‘coolest man’ to Dulquer Salmaan‘s Salute release getting postponed, here’s a look at the top trending south news today that you shouldn’t miss. Also Read – Trending OTT News Today: Allu Arjun’s Hindi version of Pushpa gets an OTT release date, Karan Johar applauds Minnal Murali actor Tovino Thomas and more

Saina Nehwal has opened up on Siddharth’s controversial tweet in which he addressed her as ‘subtle cock champion of the world’. According to PTI, Saina reacted to it and said, “Yeah, I’m not sure what he meant. I used to like him as an actor but this was not nice. He can express himself with better words but I guess it’s Twitter and you remain noticed with such words and comments.”

Dulquer Salmaan’s Salute release postponed due to Covid spike
The release of director Rosshan Andrrews‘ much awaited Malayalam film, Salute, featuring Dulquer Salmaan in the lead, has been postponed. The film was eagerly awaited as Dulquer plays a cop in the film for the very first time. Taking to social media to make the announcement about the film’s release being postponed, Dulquer said, “We at Wayfarer films are bound to show social responsibility ahead of our personal interests. Just like all of you, we were most excited and eagerly awaiting our next release.

Nagarjuna, Naga Chaitanya confident about success of Bangarraju
The musical night event of Nagarjuna and Naga Chaitanya-starrer Bangarraju was held in Hyderabad as the father-son duo sounded confident about the movie’s success. Nagarjuna, during his speech, revealed that the theatrical trailer of Bangarraju will be launched on January 11, a couple of days before the movie hits the screens. The Manmadhudu actor also remembers January 14, the release date of Bangarraju, as an important day for Annapurna Studios, because it was founded on the same date.